Foreign Minister Vivian Balakrishnan told his Asean colleagues yesterday that it remains an "immediate priority" to start the repatriation of refugees who fled Myanmar's Rakhine state in a safe, voluntary and dignified basis.

According to a statement from the Ministry of Foreign Affairs, Dr Balakrishnan, who is in Bangkok this week attending the annual Asean Foreign Ministers' Meeting, said racial and ethnic discrimination remained a challenge in all societies and called on Asean member states to take a strong stand against it.

Later in the day, in the traditional joint communique, the foreign ministers supported Asean taking on a bigger and more visible role in providing humanitarian assistance, promoting sustainable development and facilitating the repatriation process.

More than 700,000 Muslim Rohingya fled from Myanmar's western Rakhine state to Bangladesh after a brutal military crackdown against Rohingya insurgents in 2017. No official repatriations have taken place amid Rohingya fears over their security and future in Myanmar - where they are not recognised as an official ethnic group and face immense difficulties being legalised as citizens.

While Myanmar has rejected international attempts to investigate its military for the alleged atrocities, it worked with Asean to conduct a preliminary needs assessment for repatriation. The report was heavily criticised for whitewashing what some parties have likened to ethnic cleansing.

The Asean foreign ministers' joint statement called for a comprehensive assessment of needs to be conducted at suitable intervals, and said: "We stressed the need to find a comprehensive and durable solution to address the root causes of the conflict and to create a conducive environment so that the affected communities can rebuild their lives."

"While Minister Balakrishnan noted that the Asean region had not experienced prolonged periods of haze pollution in the last three years due to the strong political will of Asean member states in tackling the problem, it remained worrying that the total number of hot spots this year had exceeded that of the same period last year.

"Although good progress had been made in combating transboundary haze pollution, Minister Balakrishnan stressed the need to maintain efforts on that front," the statement said. 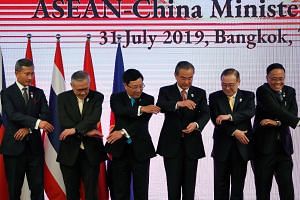 The Asean foreign ministers' meet, followed by dialogues with Asean's partners as well as the East Asia Summit and Asean Regional Forum, are being convened as several issues cloud regional security.

The growing United States-China trade war is weighing on regional growth, while a spat between Japan and South Korea over high-technology material and wartime forced labour has raised questions over regional security arrangements, amid continued missile tests by nuclear-armed North Korea that took place as recently as yesterday.

Stand-offs among rival claimants in the strategic South China Sea - which include China, the Philippines, Vietnam, Malaysia and Brunei - continued this week.

Dr Balakrishnan yesterday also met China's Foreign Minister Wang Yi on the sidelines of the Asean Foreign Ministers' Meeting, where they both reaffirmed excellent relations between Singapore and China.

In their discussions, they welcomed new areas of cooperation such as the Singapore-Shanghai Comprehensive Cooperation Council, Singapore-Shenzhen smart cities twinning, and collaboration under the Belt and Road Initiative.

The ministers exchanged views on regional and international developments and took stock of the positive developments in Asean-China relations.

Mr Wang expressed appreciation for the constructive role that Singapore has played in advancing Asean-China cooperation.