KOTA KINABALU - The Sabah by-election on Jan 18 will be contested by a candidate from Parti Warisan Sabah, said its president Shafie Apdal, after he received the nod by Prime Minister Mahathir Mohamad to do so.

"I have told Tun Mahathir over Sabah Pakatan's decision on candidacy," Datuk Seri Shafie said on Monday (Dec 17), as quoted by The Star newspaper. "He has agreed and said that they will support (Warisan)."

The verbal agreement, if followed through, would avert a damaging three-cornered fight between allies Warisan and the Pakatan Harapan (PH) coalition chaired by Dr Mahathir.

Umno is expected to defend the Kimanis parliamentary seat it recently lost in a court battle.

Warisan is an ally of PH, a coalition of four parties that governs Malaysia.

PPBM today has nine assemblymen in the Sabah state legislature, all of them defectors from Umno.

The muscling in of PPBM into Sabah had raised expectations that it would contest the Kimanis by-election next month, the 10th by-election since the general election in May last year.

PH and Warisan badly need to win this by-election to rebound from losing four by-elections held this year, a mix of state and Parliament seats, to Umno-led Barisan Nasional. 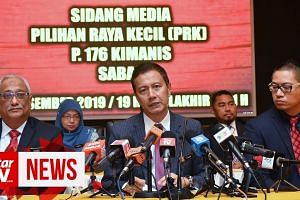 PH won in the remaining five by-elections held since the general election.

Last week, Sabah Pakatan leaders endorsed Warisan to contest in the by-election that has been called after an Election Court's decision to nullify the May 9 election result.

Mr Shafie, who is also Sabah's Chief Minister, said Warisan will make a decision on the choice of candidate at the appropriate time and asked all party machinery to begin moving to the ground.

"We are ready. My advice to all members is not to take it lightly and become complacent."