Sabah Chief Minister Mohd Shafie Apdal said on Wednesday (Jan 22) that last weekend's Kimanis by-election defeat was a sign from constituents that they did not want the PSS. The decision to scrap the PSS was made by the Sabah state Cabinet led by him.

A Warisan candidate lost in a by-election on Saturday to a candidate from opposition coalition Barisan Nasional, with the PSS issue cited as a key major reason for the defeat.

The planned new pass was meant to replace three different documents issued to illegal migrants into Sabah who are mostly from southern Philippines, named the IMM13, Burung-Burung card and the Census Certificate.

But there is a fear among Sabahans that the PSS would allow the foreigners to officially remain in the state and eventually be allowed to take up Malaysian citizenship, despite explanations by both Warisan and the federal Home Ministry.

Due to war and poverty in southern Philippines next door, Sabah has over the decades seen the influx of tens of thousands of Filipinos.

Mr Shafie said he would seek a meeting with the Home Ministry in Kuala Lumpur next week to inform it of the state Cabinet's decision as implementation of the PSS is under the purview of the ministry.

"The state Cabinet on Wednesday (Jan 22) decided to cancel the PSS after listening to the voice of the people - not only during the Kimanis by-election, but all those who voiced out against it," Mr Shafie told a news conference. 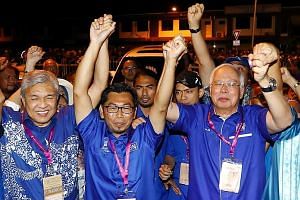 Asked if there were any proposals to replace the PSS, Mr Shafie said it would depend on the Home Ministry, adding that the state would continue its role to manage illegal immigrants.

He told reporters that the by-election loss should not be blamed on anyone else but Warisan itself.

"Warisan is responsible for whatever decision taken by Kimanis folks. Don't blame (Prime Minister) Tun Mahathir Mohamad; he has nothing to do with the by-election in Sabah as he was not around.