SINGAPORE - Work to upgrade a runway at Soekarno-Hatta International Airport located on the outskirts of Jakarta will be completed by January 2018.

According to Angkasa Pura II, the upgrading is aimed at reinforcing the airport's "North" runway, to allow wide-body aircraft like the Boeing B-777 to carry their maximum load. Mr Agus said construction started last month and it is expected to be completed in 15 months.

Soekarno-Hatta International Airport operates two parallel runways - North and South - each of which are about 3.6km long and 60m wide.

There are three terminal buildings at the airport, serving more than 50 airlines, both domestic and foreign carriers. 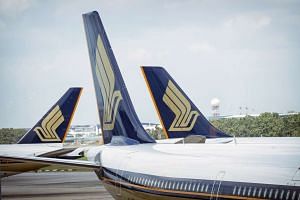 On Monday, Singapore Airlines (SIA) said it was told by the Indonesian authorities to also cut existing flights to Jakarta due to runway maintenance works at the airport.

This just weeks after it announced the cancellation of a new Singapore-Jakarta-Sydney service for the same reasons.

The latest development will see the national carrier cut five Singapore-Jakarta flights it operates in a week, starting Dec 1.

The airline has been operating 63 flights a week to and from Jakarta since July 2013.