The Indonesian government is taking steps to boost business in Batam, Bintan and Karimun islands, with business officials visiting Singapore next week to urge new companies to invest in the flagging, nearly decade-old free trade zone.

Batam, part of what is collectively known as the BBK in the Riau Islands province, has recently been in the news for all the wrong reasons, from the foiled rocket terror plot to attack Singapore to riots over land disputes.

Besides security concerns, the BBK zone also appears to have lost its shine, business-wise.

Analysts say it has failed to attract significant investment or create employment due to a lack of infrastructure, rising labour costs and red-tape issues.

But improvements are being put in place, Indonesia's Ambassador to Singapore, Mr I Gede Ngurah Swajaya, told The Straits Times.

A one-stop processing centre for paperwork will iron out administrative kinks and business licence approvals for companies which fulfil mininum capacity requirements will take only three hours, when previously they could take weeks to months, he said. "Building construction can also start after three hours," he said. "We know that growth has been stagnant for a couple of years; that's the reason why the government is now trying to revitalise Batam."

The Nov 29 forum, organised by the embassy and and the country's Coordinating Ministry of Economic Affairs, hopes to explore new areas of business such as property and the digital economy.

With the emergence of new Singapore-Indonesia developments in Kendal in Central Java and Makassar in South Sulawesi, the authorities overseeing the BBK zone have more reason to pull up their socks.

"They are competition to us. Automatically, we have to be just as efficient," Batam Indonesia Free Zone Authority (BP Batam) chairman Hatanto Reksodipoetro said. He said the island's own airport and port can be better developed.

Park by the Bay in Kendal, launched on Nov 14 by Singapore Prime Minister Lee Hsien Loong and Indonesia President Joko Widodo, is a joint venture between Sembcorp Development and Indonesian developer Jababeka.

Analysts have said the new project marks a new trend of Singapore companies venturing beyond places such as Jakarta and Batam. 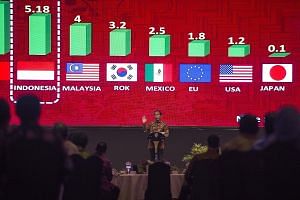 Carry on with business, says Jokowi

The Kendal project and BBK cater to different businesses and are not meant to compete, but rather allow companies to diversify their investments in the archipelago, while creating more jobs for Indonesians.

Jababeka chairman S. D. Darmono said electricity supply in Kendal could be a concern, adding: "Possibly yes it's okay today, but if we look at the next five years, then it would be a completely different situation when we bring in thousands of factories to Kendal."

On the other hand, those with labour-intensive manufacturing operations could consider Semarang or Kendal in Central Java or areas in eastern Indonesia.

Several Singapore companies contacted say the close proximity to the Republic, only a 45-minute ferry ride away, means they will not shift operations.

While there had been terror scares, these were isolated cases. Mr Jimmy Soh, group managing director of beehoon manufacturer Chye Choon said he is able to reduce operating costs, from manpower, rent to utilities, by more than a third when he opened a factory line in Batam.

"It's nearer to Singapore, so for us to re-export to other countries which we are selling to is a lot easier," he said.

"The management sees it as an extension of Singapore," chief corporate officer Lynn Tan said. She added: "However, the flip side of the coin is the not-so-business-friendly manpower policy. We had to deal with unions, demonstrations and strikes."

A version of this article appeared in the print edition of The Straits Times on November 24, 2016, with the headline 'Riau zone looks to S'pore for a boost'. Subscribe
Topics:
More
Whatsapp Linkedin FB Messenger Telegram Reddit WeChat Pinterest Print Purchase Article Copy permalink