YANGON (REUTERS) - Lawyers for two Reuters reporters jailed in Myanmar for breaking a colonial-era official secrets law appealed to the Supreme Court on Friday (Feb 1) against their conviction, as a rights group said the government wielded repressive laws against peaceful critics.

“Our petition asks the Supreme Court to finally provide justice to Wa Lone and Kyaw Soe Oo, reverse the lower courts’errors, and order the release of our journalists,” Reuters said in a statement.

Wa Lone, 32, and Kyaw Soe Oo, 28, were jailed for seven years after being convicted in September in a landmark case that has raised questions about Myanmar’s progress towards democracy and sparked an outcry from diplomats and human rights advocates.

Also on Friday, Myanmar released from prison a policeman who told a court last year how officers had planted secret documents on the two reporters in order to “entrap” them.

The policeman, Moe Yan Naing, criticised the law under which he was punished.

“This police disciplinary law is one of the laws we must amend while we are marching on the path towards democracy,” Moe Yan Naing, said on his release after serving about nine months of a one-year jail sentence for violating police discipline.

“This law can cause police much suffering because it is outdated,” he told reporters outside Insein prison, on the outskirts of the commercial capital, Yangon.

Asked how he felt about the people who ordered his arrest, he said he would console himself through religion.

“I am a Buddhist, I can find peace with that through our Buddhist way,” he said, and that he felt “sorry” for the two reporters still behind bars.

Human Rights Watch said in a report freedom of expression had been deteriorating since Ms Suu Kyi’s administration came to power in 2016, with prosecutions creating a “climate of fear” among journalists.

“Aung San Suu Kyi and the National League for Democracy promised a new Myanmar but the government still prosecutes peaceful speech and protests and has failed to revise old oppressive laws,” the report’s author, Ms Linda Lakhdhir, said in a statement.

The report quoted figures from Myanmar free-speech group Athan showing that prosecution for peaceful speech featured in at least half of about 140 cases filed since 2016 under the Telecommunications Act, which prescribes up to two years in jail for anyone who “defames” someone using a telecoms network.

“Aung San Suu Kyi’s government has had a real opportunity to abolish the tools of oppression used by the military juntas, but has instead used them against peaceful critics and protesters,” Ms Lakhdhir said. 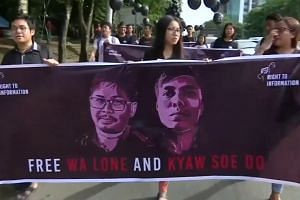 In September, Ms Suu Kyi said the jailing of the Reuters reporters had nothing to do with freedom of expression. The week after their conviction, she said they were sentenced for handling official secrets and “were not jailed because they were journalists”.

Before their arrest, the reporters had been working on a Reuters investigation into the killing of 10 Rohingya Muslim men and boys by security forces and Buddhist civilians in western Myanmar’s Rakhine State during an army crackdown that began in August 2017.

The operation sent more than 730,000 Rohingya fleeing to Bangladesh, according to UN estimates.

Last month, the high court rejected an initial appeal against the reporters’ convictions, saying they had behaved in a way that showed they intended to harm the country.

In response to that ruling, US Vice-President Mike Pence said the decision was deeply troubling and showed Myanmar’s courts “failing a basic test in democracy”.

In their initial appeal, defence lawyers asserted the lower court that tried the case had wrongly placed the burden of proof on the defendants.

The defence also said prosecutors had failed to prove the reporters gathered and collected secret information, sent information to an enemy or intended to harm national security.

At the time of the reporters’ trial, Moe Yan Naing, a police captain, gave details of the hours prior to their Dec 12, 2017, arrest and said police had arranged a “set-up”.

Shortly after his court appearance in April, Moe Yan Naing was sentenced to prison for violating the Police Disciplinary Act by having previously spoken to Wa Lone. His family was also evicted from police housing in the capital, Naypyitaw.

At the time, police spokesman Colonel Myo Thu Soe told Reuters Moe Yan Naing had been punished “according to the police disciplinary act”.

Police said the eviction order was not related to Moe Yan Naing’s testimony at the reporters’ trial.