The monsoons are no longer lashing Bangkok, in that soggy season when my sons sometimes have to wade through waist-high floods to get to soccer practice.

So why did I get soaked last week, as I walked along a major avenue in the Thai capital?

The liquid, which soon flooded one of Bangkok's busiest intersections, came from water cannon aimed at alleviating the smog that has shrouded Bangkok for weeks.

Some of the giant hoses were connected to trucks that only contributed to the bad air afflicting Bangkok. Smoke spewed from the trucks' exhaust pipes.

Officials from Thailand's Pollution Department estimate that vehicle emissions account for roughly 60 per cent of the city's chemical haze.

Like many Asian megalopolises, which crowd the catalogue of the world's most polluted cities, Bangkok suffers from a toxic amalgam: unchecked industrialisation and urbanisation, a car-crazy populace and lax regulation.

A decade ago, the Thai capital was a rarity in Asia, a place where the air had become cleaner largely because of a ban on the most polluting vehicles. Those days are gone.

Last month, Bangkok cracked the list of the top 10 cities with the foulest air on the planet.

Like many Asian megalopolises, which crowd the catalogue of the world's most polluted cities, Bangkok suffers from a toxic amalgam: unchecked industrialisation and urbanisation, a car-crazy populace and lax regulation.

The burning of fallow fields and a dry season with little wind exacerbate the crisis.

Even as pollution control monitors say they are eliminating the dirtiest diesel engines, a walk on a Bangkok road can be a choking experience. City buses belch murky smoke. There are too many cars for too few roads, and too little interest in public transportation.

"In our society, a car is not just a car," said Ms Tara Buakamsri, the Thailand country director for Greenpeace South-east Asia. "It's a representation of affluence and a symbol of ownership. It will be very hard to get people to give up their cars." 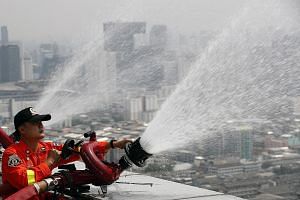 We moved from Beijing to Shanghai just as the air there got worse. Then we moved to Bangkok.

Like China, Thailand seems to be going through the same cycle: denial of a chronic problem, ineffectual solutions and then a sudden realisation that the chemical miasma is not going to magically disappear without coordinated policies.

Scientists agree that spraying jets of water, especially from polluting trucks, will do little to disperse Bangkok's smog.

Nor will other unorthodox methods - like water-spraying drones that have been deployed in recent days in Bangkok - fix the chronic air problem.

A version of this article appeared in the print edition of The Sunday Times on February 03, 2019, with the headline 'Response to the choking pollution? Spraying jets of water'. Subscribe
Topics:
More
Whatsapp Linkedin FB Messenger Telegram Reddit WeChat Pinterest Print Copy permalink