PETALING JAYA (THE STAR/ASIA NEWS NETWORK) - Some 200 residents of a condominium block in Petaling Jaya, Malaysia's Selangor state had to be evacuated after five homemade bombs were found by the police at an apartment unit in Damansara Perdana on Sunday (April 17).

Petaling Jaya district police chief, Asst Comm Mohd Zani Che Din, said the bombs, which were located in an "inner area" of the unit of the 23-storey block, have been moved to a safe area. The bombs were taken to a nearby quarry and detonated.

"Two suspects, both locals, have been caught. The unit was rented by one of them," ACP Mohd Zani told reporters.

He said the 200 residents of the block were evacuated as a safety precaution.

The condo is in an affluent township of Petaling Jaya, which is about 10 minutes' drive to the west of Malaysian capital Kuala Lumpur.

Fire and Rescue Department personnel arrived at the scene at 8.30am and left at 11.40am, while the police continue to conduct their investigations.

Residents were in shock upon learning of the bombs in their apartment block.

An owner, identified only as Martin, who has lived there for half a year, said he was sleeping when the police raided the unit, but was awakened by neighbours at around 8.30am. 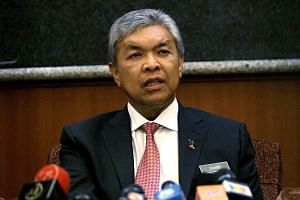 "Everybody was knocking on everybody's door to let them know of the evacuation. This place is quite quiet and this is the first time something like this has ever happened," said Martin.

At around 11am, a person who looked to be the owner of the unit where the bombs were found was seen talking to the police. He brushed off requests for comments by the media.

Residents said the police raid led to the discovery of explosives in the apartment.

Police said they received a call over a possible bomb threat and a bomb disposal squad was dispatched to the scene.