Members of a joint Indonesian search-and-rescue team yesterday raced against time to find trapped survivors of a magnitude-7 earthquake that struck Lombok on Sunday, as the death toll topped 100.

National Disaster Management Agency (BNPB) spokesman Sutopo Purwo Nugroho said at a press conference in Jakarta yesterday that at least 105 people have died, including two in neighbouring Bali, while 236 others have been injured. No foreigners were among the dead.

He said the joint team, made up of rescue workers and military personnel, combed through collapsed buildings to look for victims still trapped in the rubble in the most affected areas in North Lombok Regency and West Lombok Regency.

North Lombok Regency has posted the largest number of casualties - at least 78 people dead and 64 others injured.

A number of hotels and resort buildings collapsed on the three small islands, which are located on the north-west coast of Lombok. Dr Sutopo said that many of the buildings there were earthquake-prone, and the islands are located close to the quake's epicentre in the north of Lombok.

In West Lombok Regency, as many as 16 people were found dead.

Evacuation efforts yesterday focused largely on five areas in the north - the three Gili islands, as well as the Tanjung and Kayangan districts on the main island of Lombok.

"Besides tourists, local residents and employees of hotels and resorts also want to get out of the Gilis," Dr Sutopo said.

The joint team has evacuated at least 4,636 tourists and local residents of the islands by boat to Benoa Port on Bali as well as to Lembar Port and Bangsal Port on Lombok as of Monday night, according to BNPB.

Electricity remained cut off in heavily affected areas yesterday, while telecommunications networks were not working properly.

Five bridges on the island of Lombok were also damaged, hindering the evacuation, Dr Sutopo said.

The authorities are struggling to get aid to isolated areas, mostly hills, where local residents sought refuge following a tsunami warning on Sunday evening. 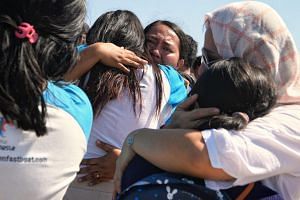 In Pictures: Reunion and rescue after the Lombok earthquake

Lombok quake: Evacuation of tourists from islands to be completed by Tuesday evening, says Indonesian navy

While residents have been allowed to return home, some refused to do so because they were still traumatised.

Dr Sutopo said the government may extend the state of emergency for West Nusa Tenggara province beyond Saturday.

"Under the current situation, we estimate that the status will be extended, possibly for a week," he said.

The Public Works and Public Housing Ministry will soon drill wells and set up public hydrants to meet demand for clean water.

Portable toilets will also be set up for local residents.

When asked if the government has received foreign offers of aid, Dr Sutopo said that the go-vernment has yet to request international assistance because local resources have so far been deemed to be sufficient.

He said that the authorities in Singapore, Malaysia, Australia and Taiwan, among others, have offered their assistance.

Foreign Ministry spokesman Arrmanatha Nasir told The Straits Times that the government is assessing what kind of assistance is necessary and whether Indonesia needs international aid to deal with the latest earthquake.