SENTANI (Papua) • A baby trapped under rubble when flash floods destroyed his home in Indonesia's Papua province has been reunited with his father. The disaster killed the rest of the family, officials said yesterday, as the death toll hit 79.

The five-month-old boy was plucked on Sunday from debris inside a house where his mother and siblings were found dead in the hard-hit town of Sentani.

"We took the baby to the hospital and had him treated," Papua military spokesman Muhammad Aidi told Agence France-Presse.

"He was in stable condition and has been released. The father was distressed but happy to be reunited with his baby."

The news came as Indonesia's disaster agency raised the official death toll from 58 on Sunday, with more than three dozen people still missing.

Indonesia's military took up the grim task of putting the corpses of mud-caked victims into body bags, after flash floods and landslides ripped through the area.

Scores have been injured in the disaster, triggered by torrential rain last Saturday.

Two bridges were washed away. 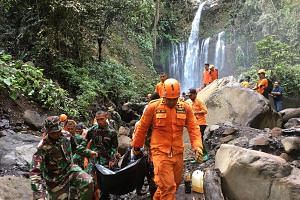 Amateur videos and photos verified by the disaster agency show that the flood also carried away large trees and even a light aircraft.

"The death toll could still go up," said Mr Sutopo.

Rescuers battled mud, rocks and fallen trees as they searched for survivors, while medical personnel treated the many wounded in makeshift tents.

In Doyo, one of the areas most affected by the disaster, a housing complex was littered with huge rocks believed to have rolled down from a nearby mountain, while sediment and waste were piled up on the pavement.

The military said 5,700 people have been evacuated from the hard-hit area.

"We have over 1,000 personnel searching for more victims," Mr Aidi said.

A military command has set up a public kitchen that distributed 5,000 meals on Sunday afternoon.

Disaster-prone Indonesia has issued a 14-day state of emergency in response to the floods.

In January, floods and landslides killed at least 70 people on Sulawesi Island, while earlier this month hundreds in West Java province were forced to evacuate when torrential rains triggered severe flooding.

The Indonesian Environmental Forum has blamed deforestation in the Cyclops mountains as the cause of the Papua disaster.