Philippine security officials said yesterday that they believed they had "neutralised" remnants of an alliance of extremists still loyal to the Islamic State in Iraq and Syria (ISIS) following the purported death of its de facto leader in clashes last week.

The military reported last Friday that four Muslim rebels were killed in clashes with security forces in Tuburan town, in Lanao del Sur province, 800km south of the capital Manila. Among those believed to have been killed was Humam Abdul Najib, known as "Abu Dar", who security forces believe had led Daulah Islamiyah, one of a multitude of pro-ISIS factions drawing militants from the Philippines and abroad to the thick jungles of volatile Mindanao island.

Forensic tests were being carried out to confirm Abu Dar's death.

Little is known about Abu Dar. Said to be in his 40s, he was born in Pagayawan town, in Lanao del Sur.

He is said to have acted as a "money courier" during the fighting in the largely Muslim southern Mindanao city of Marawi.

About 1,000 pro-ISIS militants stormed and seized control of large parts of Marawi in 2017. They held on to the city for five months.

Hundreds were killed in Marawi, more than 350,000 were displaced, and half the city was left in ruins.

The battle for Marawi was the most intense seen in the Philippines since World War II and stoked wider concerns that ISIS had ambitions to turn Mindanao into a base for its operations in the region.

The militants' core leaders were killed, among them Isnilon Hapilon, ISIS' anointed "emir" in South-east Asia.

He managed to flee Marawi, along with nine other plotters of the siege and some 300 fighters, carting off 500 million pesos (S$12.8 million) in cash and valuables they looted from banks, shops and homes in the five months they held on to half the city.

Abu Dar was said to be using this largesse to recruit new fighters for attacks across Mindanao. "He had the money, he had the resources, he had the connections," said Brigadier-General Bienvenido Datuin, the military's civil relations chief.

At one point, Abu Dar was believed to have been named as Hapilon's successor.

If confirmed, his death would represent rare progress at a time of heightened alert across the predominantly Muslim areas of Mindanao.

Still, the Philippine government is far from rolling back a new wave of extremism sweeping across the island.

ISIS reportedly has a new "acting emir" in the Philippines, Hatib Hajan Sawadjaan, a 60-year-old uneducated village elder with a propensity for savagery. 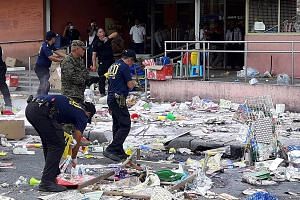 Sawadjaan and his small, but brutal, faction in the Abu Sayyaf group reportedly plotted the deadly twin blasts in January that tore through a Roman Catholic cathedral on Jolo island, in the Muslim province of Jolo.

At least 23 people were killed and over 100 injured in the attack.

Security experts believe Mindanao's Muslim areas, with their dense wilderness and the central government's weak authority, have attracted a range of militants even as ISIS is collapsing in Iraq and Syria.

Defence Secretary Delfin Lorenzana has said the military is keeping tabs on at least 44 terrorists from abroad scattered across safe havens in Mindanao.

Apart from Sawadjaan's group, there are more than a dozen other militant factions in central Mindanao opposing any peace deal with the Philippine government and opting instead to embrace ISIS' wider agenda to establish a "caliphate" in South-east Asia.