Indonesian President Joko Widodo has sought to raise morale and give hope to victims in quake-ravaged areas across Central Sulawesi, as a new wave of much-needed supplies and aid arrived in the province.

Speaking to reporters yesterday during his second visit this week to the affected areas in the provincial capital Palu and nearby Donggala regency, Mr Joko said emergency workers are making progress with relief efforts.

He gave the assurance that the process of evacuation, cleaning, and search and rescue in Palu has gone according to plan.

Logistical support, including the resumption of fuel and electricity supplies, is also slowly returning to pre-quake levels, he said.

"But it is a process," said Mr Joko as he reiterated that relief efforts will take time.

The death toll from last Friday's magnitude-7.4 earthquake, which triggered a deadly tsunami, has been mounting.

The toll was 1,407 as of yesterday, said Dr Sutopo Purwo Nugroho, the spokesman for the country's national disaster mitigation agency.

At least 70,820 people have been displaced after their homes were destroyed in the wake of the earthquake and tsunami, with Palu, Donggala and Petobo village, south of the capital, among the worst hit.

About 113 people are still missing, with hopes of finding them alive diminishing as rescuers race against the clock to cover the massive disaster site.

And as survivors grow increasingly desperate, with food and clean water still in short supply, some have turned to looting, raiding shops for daily necessities, and making off with cash and laptops.

"On the first and second day, clearly no shops were open. People were hungry. There were people in dire need, so that's not a problem," said deputy national police chief Ari Dono Sukmanto, referring to the looting. 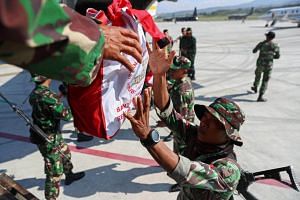 "But after day two, the food supply started to come in, and it only needed to be distributed. We are now re-enforcing the law."

Police on Tuesday said they have arrested 35 people so far and will clamp down further on looting. Reports have emerged of officers using warning shots and tear gas to stop people from ransacking shops.

Mr Joko, who yesterday visited the site of the ruined Roa Roa Hotel where about 30 people remained trapped under rubble, said rescue efforts such as the one at the hotel site will continue so that all victims can be found.

Heavy lifting equipment and other machinery which have started to arrive in recent days are expected to speed up the process.

Mr Joko also urged shop owners to open for business again when possible, saying that resuming economic activity is important so that people can return to their daily lives as soon as possible.

"This is so that we can move on from this stage and into the next immediate process of rehabilitation and reconstruction," he said.

Offers of support from the international community have poured in, with almost 30 countries, including Singapore, and two international organisations having come forward as of Tuesday.

Singapore's Defence Minister Ng Eng Hen said in a Facebook post yesterday evening that one of the planes had arrived in Palu, while the other was waiting to fly into the city from Balikpapan Airport in the Indonesian province of East Kalimantan.

The package, worth about $240,000, was donated by the SAF, said Singapore's Defence Ministry (Mindef) in a statement yesterday.

After delivering the aid, the two RSAF C-130 aircraft will remain in Indonesia to help the TNI evacuate quake victims.

Meanwhile, Mount Soputan in North Sulawesi erupted yesterday, spewing ash as high as 4,000m in the air. It is located about 900km north-east of the quake-hit areas. No casualties have been reported.