MARAWI • A week-long assault by Islamist rebels in a southern Philippine city is being fuelled with stolen weapons and ammunition as well as fighters who have broken out of jails, the military said yesterday, as troops battled militants resisting ground and air attacks.

The pro-ISIS Maute group has proven to be a fierce enemy, clinging on to the heart of Marawi City through days of air strikes on what the military called known rebel targets, defying expectations of a swift end to their occupation.

The military yesterday deployed SF-260 close air support planes for the first time to back attack helicopters and ground troops looking to box rebels into a downtown area.

Army spokesman Brigadier-General Restituto Padilla said the hardline Maute had kept up the fight with rifles and ammunition stolen from a police station, a prison, and an armoured police vehicle.

"They were able to get an armoured vehicle of the police. Inside, there is a supply of bullets," he said, adding that the ammunition was among the stolen items the rebels were using to resist the troops being poured into the area.

The militants, who freed jailed comrades to join the battle, opted for urban warfare because arms were available in the city and homes and shops provided ample supplies of food, said Brig-Gen Padilla. "Yes indeed, there was planning involved," he added. 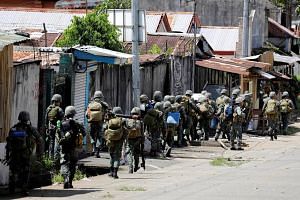 The military has from the outset insisted that it has control of the situation, but the slow pace of efforts to retake Marawi has prompted questions about its strategy.

That has been compounded by social media images of smiling fighters with assault rifles posing on an armoured, US-made police combat vehicle, dressed in black and wearing headbands typical of the Islamic State in Iraq and Syria (ISIS).

Another picture showed a bearded man at the wheel of a police van flying an ISIS flag. The authenticity of the images has not been independently verified and the military has urged the public not to spread "propaganda".

Philippine troops have killed 89 militants during more than a week of urban battles. A final showdown is expected to be fierce as the gunmen protect their leaders and hold hostages, the authorities said.

The amount of territory in the city that remaining gunmen control has been cut to just 10 per cent, Brig-Gen Padilla said, but he warned of more intense battles ahead.

"That 10 percent is most likely the area that is heavily guarded and defended by any armed men if they are protecting any individual of high value."

A Catholic priest and some 240 civilians being held captive by the Maute has appealed to Philippine President Rodrigo Duterte to consider their plight and stop the military operation against their captors. In a video sent on Tuesday on a Telegram channel used by ISIS, Father Teresito "Chito" Suganob said: "We are asking your help to please give what your enemies are asking for."

Mr Duterte yesterday said he would not talk to the rebels and that he was determined to keep ISIS out of the country - a change in stance from last week, when he urged Maute militants to talk with him.

"I will not talk to the terrorists," he said in a speech to the military in Davao City yesterday.

The Philippine government has been alarmed by the strength of the Maute and intelligence reports suggesting that it has teamed up with other extremist groups and also recruited foreign fighters.

Mr Duterte has declared martial law on Mindanao island, where Marawi City is located, in a move to crush a movement he is now calling an ISIS invasion.