Temperatures across many Malaysian states soared to between 33 deg C and 40 deg C in the past three days, even though seasonal rains have begun.

The sweltering heat brought on by the El Nino phenomenon forced school closures in the northern state of Perlis on Monday, as well as in two districts in the central state of Pahang in the past two days, as temperatures in those places exceeded 37 deg C over a 72-hour period.

Ms Rusma Md Taha, headmistress at SMK Temin secondary school in Jerantut district in Pahang, told The Straits Times that the school is taking extra measures to help students cope with the heatwave, such as by letting them take turns to sit in air-conditioned facilities and urging them to keep themselves hydrated. 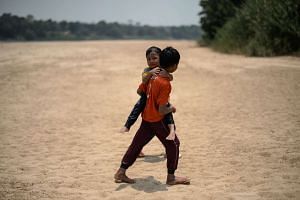 In Pictures: Heatwave in Malaysia 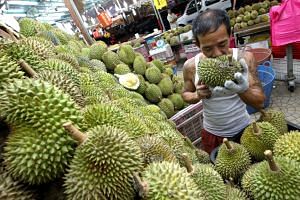 Hot season puts the heat on durian supply in Malaysia

"It is the teachers who get really tired monitoring and making sure the pupils do not go outdoors," he told The Straits Times.

Close to 50,000 students from 155 primary and secondary schools in the Pahang districts of Jerantut and Temerloh will resume lessons today as temperatures have fallen, Pahang education director Rosdi Ismail said yesterday.

In the northern state of Kedah, 18 cases of heatwave-related illnesses have been reported since March 2, involving two toddlers, seven students and nine adults.

The intense heat has led to a marked increase in electricity consumption as consumers crank up their air-conditioning.

According to the Statistics Department, the electricity sector output grew 1.2 per cent in February, compared with that in the previous month. National energy provider Tenaga Nasional reported a record demand of 17,175MW on March 9, breaking the previous record of 16,901MW on June 6, 2014.

The dry spell is also causing dams across the nation to dry up, with four in Kelantan, Penang, Johor and Perlis falling to critical levels last month.

The low water levels have prompted the Perlis authorities to consider water rationing if the state does not receive rainfall over the next four days.

But the situation may be alleviated with cloud-seeding exercises being carried out by the National Disaster Management Agency in the states of Perlis, Pahang and Kedah.

In the eastern state of Sabah, fires made worse by the heatwave in the Binsuluk and Trusmadi forest reserves were finally put out by rain yesterday after burning for weeks.

The first shipment of bottled water was distributed in Sabah's Pulau Banggi yesterday. Most of the villages on the island have been hit by water shortages.

Meanwhile, the supply of durians is expected to drop by up to 40 per cent because of the hot weather, reported The Star. Farmers said the prolonged heatwave have badly affected the durian trees.

In a statement yesterday, the Malaysian Meteorological Department said temperatures across the country are expected to decline gradually until next Monday.

The current heatwave is the worst since 1997 and 1998, when the El Nino phenomenon then caused droughts and triggered water-rationing measures.