Riau Andalan Pulp and Paper (RAPP), the operational unit of Singapore-based pulpwood company April, has taken Indonesia's Environment and Forestry Ministry to court, after the ministry voided its 10-year business plan and told it to revise the plan.

The ministry said the plan for RAPP's Sumatra concession was voided because the company failed to comply with Indonesia's new peatland protection framework. The 2016 law aims to better protect fragile, flammable peatlands - a major source of choking annual haze that has blighted the region in the last two decades.

RAPP argued that it should be affected by the new law only after its concession contract expires. It said that any new law should not take effect retroactively.

The Jakarta state administrative court is set to rule on the case tomorrow. April, or Asia Pacific Resources International Limited, is Indonesia's second-largest pulp and paper company. It manages a plantation area of 480,000ha of fast-growing pulpwood trees, such as acacia in Sumatra's Riau province. More than half of this area is planted on peatlands, which the Indonesian government has been stepping up efforts to protect to prevent fires.

In October, the environment and forestry ministry urged April to meet the stricter rules, after rejecting the company's 10-year work plan covering the concession area that is more than five times the size of Singapore.

"The company had earlier stated they would revise the work plan to comply with the existing law, but then they asked not to do so, and then they filed a lawsuit," the ministry's spokesman Djati Witjaksono Hadi told The Straits Times by phone yesterday.

April denied what it filed was "a lawsuit", arguing that it was instead a petition to the court seeking fair treatment. It also claimed that the government's revocation of its work plan breached a law.

April denied what it filed was "a lawsuit", arguing that it was a petition to the court seeking fair treatment. It also claimed that the government's revocation of its work plan breached a law.

Plantation firms must submit a work plan that outlines their operations on their concessions, and the ministry must approve these or suggest revisions. For concessions with trees already planted, they are told not to replant after the next harvest. 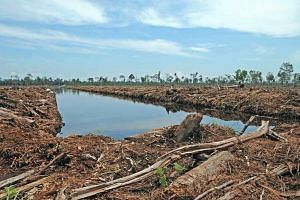 Failure to get approval means shutting down operations on affected concessions.

April's head of international communications Charles Paul Hogan said it is supportive of the government's plans and is compliant with prevailing laws and regulations. But he also said the ministry must provide clarity for the substitute land that the company will get in exchange for those rezoned for protected peatland.

President Joko Widodo is getting tougher on protecting peatland. His administration issued a No. 57 decree last year, to supersede what was seen as a weaker 2014 regulation on the protection and management of peatland ecosystems.

With the 2016 decree, all pulpwood plantation companies are required to adjust their work plan, shifting their plantation off deep peat.

Observers have hailed the government's bold moves. Public policy expert Agus Pambagio said the government as a regulator has the right to regulate the public and the industries.

"If a policy is no longer conducive to provide what the public and industries need, then the government has to revise or revoke that policy and issue a new one. And any policy indeed cannot be discriminatory," Mr Agus, who served as an expert witness in the RAPP v government case, told the court.