They were protesting against appointment of non-Malays to prominent posts, allegedly against the ruler's wishes

As Malaysia's King was about to deliver his address to Parliament yesterday morning, around 100 protesters attempted to march there.

They claimed to be speaking up for him, saying he has been silenced by the new government of Prime Minister Mahathir Mohamad, which pushed through the appointment of non-Malays to top posts, allegedly against the ruler's wishes.

The demonstrators, who were mobilised by a leader of former ruling party Umno, tried twice to walk towards Parliament from the Bukit Aman police headquarters less than 1km away.

But they were stopped by policemen and riot police each time.

"We want to show our support to the King. I don't see why Tun Dr Mahathir Mohamad is so scared and won't allow us to go to Parliament," Umno Supreme Council member Lokman Adam told the protesters.

"This shows that we have returned to being ruled under a dictatorship," he said, as demonstrators shouted "Mahathir is a coward".

Mr Lokman was director of strategic communications at the Finance Ministry when former prime minister Najib Razak was its minister.

The group, which calls itself Pemantau Malaysia Baru or New Malaysia Watch, chanted slogans, sang the national anthem Negaraku and recited the Rukunegara, which guarantees the status of the King and rule of law.

Many wore placards bearing slogans such as "Return power to the King" and "Long live the King".

They had earlier said they would march with hands bound and mouths taped as a symbol of the King's loss of power, but had apparently decided not to. 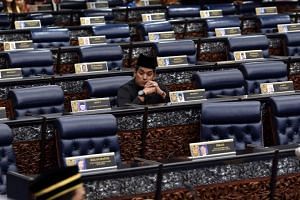 Khairy says he remains loyal to Umno despite sitting out protest

"Since Pakatan Harapan took over the government, Islamic institutions have been degraded, the special rights of Malays questioned, and the saddest part of all is that many have started insulting the Agong (King)," he said in a statement.

Mr Lokman alleged that the King, Sultan Muhammad V, had tried to oppose the appointment of Mr Thomas, a corporate lawyer, as Attorney-General, but in the end had to agree due to Dr Mahathir's insistence.

Mr Lokman also claimed that the King had tried to oppose several Cabinet appointments but gave in when there was no sign of dissent from citizens.

He told The Straits Times that the group opposed the appointment of Mr Thomas as he was formerly the lawyer for the late Communist Party of Malaya leader Chin Peng, who committed terrorist acts during the Emergency.

Mr Lokman added that the group was also against the recent appointment of Tan Sri Richard Malanjum as Chief Justice, saying that he was one of the federal judges who, in a landmark decision earlier this year, nullified the conversion to Islam of three children by their Muslim convert father. Their Hindu mother M. Indira Gandhi had filed an application against her former husband's actions.

"We believe that this Chief Justice will not be able to uphold Muslim rights - he will be biased. We want to protect Malay rights and Islam," Mr Lokman said.

Earlier this month, the same group had gathered at the Kuala Lumpur Court Complex when Najib was charged with corruption, and had heckled Mr Thomas as he attempted to speak to reporters.

They had jeered at him and shouted "Malay! Malay!" to demand that he speak in the language.