PHNOM PENH (REUTERS, AFP) - An anti-government figure was shot dead in the Cambodian capital on Sunday (July 10), at a time of rising political tension between Prime Minister Hun Sen and an opposition hoping to challenge his grip on power in elections as soon as next year.

Kem Ley, the head of a grassroots advocacy group, “Khmer for Khmer” was shot three times as he drank coffee at a convenience store attached to a gas station in the capital Phnom Penh., police said.

"He was shot dead at a mart just before 9am," Kirt Chantharith, national police spokesman, told AFP. 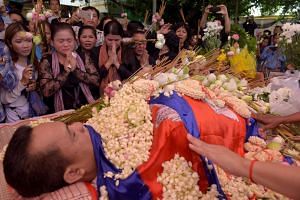 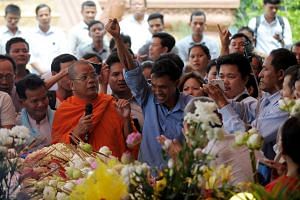 A suspect was arrested nearby and confessed to killing the analyst over an unpaid debt, Kirt Chantharith said. "But we don't believe him yet. We are working on this case," he added.

The body lay in a pool of blood on the floor of the store, as hundreds of onlookers stood outside. A water bottle and a cellphone lay nearby, as his pregnant wife, Pou Rachana, wept.

“I don’t know what happened, somebody just called me and said that he’s shot,” Pou Rachana told Reuters. “He’s already dead,” she added, as investigators kept her away from the body of her husband.

The killing comes during a period of rising political tension between Hun Sen and the opposition Cambodia National Rescue Party (CNRP), which wants to take on the prime minister in local elections in 2017 and a general election in 2018.

A popular political commentator and researcher, Kem Ley was frequently critical of Hun Sen’s administration, having most recently commented on a report by anti-corruption pressure group Global Witness.

The report, which accused the prime minister and his family of having amassed US$200 million in business interests, has been dismissed as personal propaganda by a government spokesman.

Phay Siphan, a government spokesman, described the assassination as “a vulgar and cruel act that is unacceptable”.  “His killing will further deepen the complexity of the political situation,” he told AFP, adding that all sides of Cambodia’s political divide needed to remain calm.

The opposition Cambodia National Rescue Party described the murder as a “heinous” act and called on the authorities to bring those involved to justice.

Cambodia has a long tragic history of rights and labour advocates being murdered with their killers rarely brought to justice.

Local media showed pictures of the alleged suspect being taken into custody. He appeared injured with blood running down the left-hand side of his face.

The killing will do little to lower already simmering tensions inside the impoverished South-east Asian nation, which has been dominated by Hun Sen for the past 31 years in a reign marred by accusations of corruption, electoral fraud and rampant rights abuses.

Scores of government critics and rights workers have been arrested in recent months while others have been tied up in ongoing legal cases.

Kem Ley was critical of both the government and opposition parties, advocating for a new era of clean politics in a notoriously corrupt nation which is expected to hold a general election in 2018.

But the bulk of his criticism was aimed at Hun Sen's ruling party.

The prime minister, a former army commander who defected from the Khmer Rouge, has held power alongside a small but powerful coterie of political allies that have become enormously wealthy.

A report published by Global Witness last week detailed how Hun Sen's family alone had amassed a multi-million-dollar business empire spanning the impoverished country's most lucrative sectors during his rule.