Thailand's pro-junta Palang Pracharath Party moved yesterday to seal a coalition deal with two other parties to ensure a majority in the Lower House of Parliament.

Palang Pracharath leader Uttama Savanayana, accompanied by other executives, turned up at the offices of the Democrat Party and the Bhumjaithai in Bangkok to invite both to join the coalition.

A deal with the two "kingmaker" parties will likely give the coalition control of more than half of the 500 seats in the House of Representatives.

Palang Pracharath, led by four former members of Mr Prayut's Cabinet, emerged as the runner-up in the March 24 election with 115 seats. The Democrats secured 52 seats, and Bhumjaithai, 51.

At least 16 smaller parties had earlier indicated their support for the Palang Pracharath.

A rival coalition led by the former ruling Pheu Thai Party - which has vowed to fight what it calls an extension of military power - has mustered 245 seats, six short of a majority.

Thailand has been ruled by a military government since 2014, when then General Prayut, as army chief, staged a coup and toppled the Pheu Thai-led government.

Today is the day that we make it happen. (But) there are more details that we have to work out, and Palang Pracharath will also have further discussion internally.

I have decided to join the coalition government and will inform my colleagues shortly. We will join a strong government so that we can see our policy being implemented, and the country moving ahead.

A new Constitution drafted after the coup gave an appointed 250-member Senate the power to choose the future premier alongside the elected House of Representatives.

This has given Mr Prayut, who is Palang Pracharath's nominee for prime minister, an advantage over his rivals. 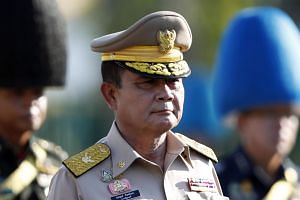 In a press conference with Bhumjaithai leader Anutin Charnvirakul yesterday, Dr Uttama said: "Today is the day that we make it happen. (But) there are more details that we have to work out, and Palang Pracharath will also have further discussion internally."

He also reaffirmed the party's intention to push for Mr Prayut's return as prime minister.

"There's no change. When we talk to anyone who is interested in working with us, we insist on this."

At the press conference, the Bhumjaithai leader left little doubt that the party would be in a Palang Pracharath-led coalition.

"I have decided to join the coalition government and will inform my colleagues shortly," said Mr Anutin.

"We will join a strong government so that we can see our policy being implemented and the country moving ahead," he added.

During the election, Bhumjaithai had strongly campaigned for the liberalisation of cannabis cultivation to allow the average household to benefit financially from Bangkok's recent move to legalise medical marijuana.

Mr Anutin has insisted that the coalition government it joins must accept Bhumjaithai's policy.

While political observers have speculated that a Bhumjaithai politician will eventually be made health minister, Dr Uttama stressed that the Cabinet line-up has not been finalised.

The Democrats will meet today to discuss Palang Pracharath's offer.

But the party is widely expected to join the coalition since Palang Pracharath and its allies voted to support Democrat adviser and former prime minister Chuan Leekpai, 80, as Speaker at the first meeting of the House of Representatives last Saturday. Mr Chuan beat Pheu Thai's Sompong Amornvivat by 258 votes to 235.

A vote on the prime minister is expected to be conducted through a joint sitting of both Houses of Parliament later this week.