One lacks charisma, but has the political machinery to back his run. The other has the charisma, but lacks the machinery. Philippines Correspondent Raul Dancel profiles the front runners in the 2016 presidential race.

MANILA • Interior Minister Mar Roxas carries the burden of having to live up to his name.

He is the grandson of the Philippines' fifth president, Mr Manuel Roxas. His father was a senator. His family name is on Manila's iconic Sunset Boulevard.

It is that burden that blows into his sails, propelling him to seek the presidency, despite the odds, missteps and his own reservations.

Now, he is within reach of that goal. Last week, President Benigno Aquino formally picked him to be his heir. All Mr Roxas has to do now is get the votes. He is trailing Senator Grace Poe and Vice-President Jejomar Binay in surveys by polling firm Social Weather Stations on who voters prefer the next president to be. 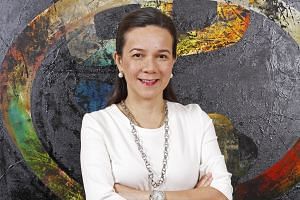 His numbers have improved from 15 per cent in March to 21 per cent in June, but Ms Poe is still way ahead with 42 per cent. Mr Binay has 34 per cent.

Pundits believe Mr Roxas, 58, does not need to catch up with Ms Poe, 46. He only has to become number two, and then narrow the gap. They believe that while the Interior Minister lacks the charisma that is propelling Ms Poe's rise, he has the backing of a well-oiled political machinery that can make up for a difference of just a few percentage points.

Mr Prospero de Vera, vice-president for public affairs of the University of the Philippines, said Mr Roxas should not lean on the President's endorsement, as that carries risks. Both Mr Aquino's achievements and failures will rub off on him.

"He has to brand himself independent of (Mr Aquino)," said Mr de Vera. Veteran campaign handlers said Mr Roxas must dispel notions that, having come from a wealthy family, he is aloof, insincere and even arrogant. He also has to make the public forget about his foibles as Interior Minister.

Mr Roxas was blamed for a botched operation - during a siege by Muslim rebels of a city in the southern Philippines in 2013 - that led to the deaths of over 200 people.

He was also criticised for the government's slow response to super typhoon Haiyan, which left over 6,000 people dead in its wake, also in 2013.

But for political science professor Richard Heydarian at the De La Salle University, Mr Roxas' achievements as a civil servant - transforming business process outsourcing into a US$13 billion industry (S$18.8 billion), for instance - would make him "far more preferable", despite his lack of mass appeal and missteps.

"If you dismiss him as a joke, I encourage you to look at the pool of available candidates, take a deep breath, and think again," Professor Heydarian said in a Facebook post.