JAKARTA (JAKARTA POST/ASIA NEWS NETWORK) - President Joko Widodo is expected to discuss Indonesia's plans to build a new capital during his official visit to Australia, which built its capital Canberra as a planned city.

The 843-metre tall Mount Ainslie is located in Canberra Nature Park in the north-east of the city and offers views of downtown Canberra, a planned city that was built to be Australia's capital in the early 20th century.

In August last year Mr Joko announced that Indonesia's capital will be moved from flood-ridden, traffic-congested Jakarta to East Kalimantan. He has pledged that the relocation will take place by the end of his second term in office in 2024, in a move that is expected to cost around 466 trillion rupiah (S$46.6 billion).

Mr Joko's visit to Australia also marks 70 years of relations between the two countries and will include discussions on political and economic issues.

"This presidential visit is especially significant, this year we celebrate 70 years of Indonesia-Australia relations," Ms Retno said, adding that later in the day, Mr Joko will attend a dinner hosted by Australian Prime Minister Scott Morrison.

"It will be an informal dinner where many topics will be discussed," she said.

Mr Joko also has a packed schedule for Monday, including a tete-a-tete with Mr Morrison, the signing of a plan of action for a 2020-2024 strategic partnership agreement, as well as another agreement on transportation cooperation, Ms Retno said. 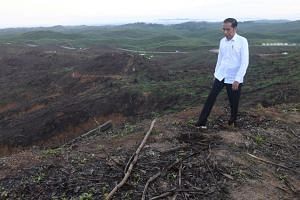 "The President is visiting right after the ratification of the IA-CEPA, so for the next five years we will have a clear road map based on the action plan we have agreed on. Once the economic pillar is clear, the other pillars will also become clear. The hope is that the relationship between Indonesia and Australia will grow stronger and more mutually beneficial going forward," Ms Retno said.

Indonesian Ambassador to Australia Kristiarto Legowo said the president will also deliver a speech at Parliament House on Monday, making him the 12th foreign leader to do so in Australian history.