The lawsuit follows two days of unrest in the capital Jakarta, where a series of peaceful protests against the vote count, which saw President Joko Widodo defeat the opposition pairing, escalated into riots that led to the deaths of eight people and more than 700 being injured.

"This path we are taking was demanded by the Indonesian people because of their disappointment and concern with the way the election was executed," Mr Sandiaga said before the filing yesterday.

"We had received numerous reports from people who saw with their own eyes and experienced first-hand many forms of injustices that affected them throughout the last election," he added. "We must earnestly and thoroughly fix this to ensure that our democracy will no longer be maimed."

Mr Sandiaga's remarks echoed Mr Prabowo's repeated allegations of electoral fraud, which he claimed had robbed them of victory in the April 17 presidential election.

The final vote tally released by the General Elections Commission on Tuesday indicated that Mr Joko won the election by 55.5 per cent to Mr Prabowo's 44.5 per cent.

Courts spokesman Fajar Laksono said judges will hear the suit on June 14, with a ruling expected by June 28. 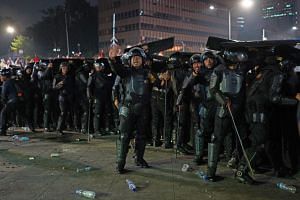 The decision by the Prabowo-Sandiaga ticket to take the legal route to challenge the results was a welcome move. Many across the country hope that it will help prevent further tensions that threaten to push Jakarta into a state of civil unrest, reminiscent of the 1998 chaos that preceded the fall of the Suharto regime.

The riots this week, said to have been the actions of paid thugs and possible domestic militants loyal to the Islamic State in Iraq and Syria, had for a moment turned parts of Jakarta into a war zone, with thousands of police in riot gear clashing with mobs of rioters.

Police are investigating the source of cash amounts of 200,000 rupiah (S$19) to 500,000 rupiah in white envelopes seized from some of the 257 suspects arrested.

Efforts to calm the nation continued yesterday, with Mr Joko saying that his current vice-president, Mr Jusuf Kalla, had met Mr Prabowo on Thursday. "Yes, it was my initiative as well as Pak Jusuf Kalla's," said Mr Joko, who previously expressed a desire to hold talks with his rival.

Indonesia's capital city returned to a state of calm yesterday morning, albeit with a strong police presence at key government buildings.

The intersection outside the office of the election supervisory agency Bawaslu, the centre of the protest rallies, still reeked of the tear gas used by riot police to quell the unrest when The Straits Times visited the area early yesterday morning.

Shopkeeper Harry Sukisman, whose store is 400m from Bawaslu, had reopened his business after two days of closure. "We could see this morning that the road in front of us got crowded again with cars, so we decided to reopen the shop," the 68-year-old told The Straits Times.

Despite rumours of more protests circulating online, only a small group of about 100 people showed up at Bawaslu and held a peace rally.