SYDNEY • Missing flight MH370 might have been taken over remotely in a bid to foil a hijack, Malaysia's former leader Mahathir Mohamad said, reviving one of the many conspiracy theories surrounding its disappearance.

The Malaysia Airlines plane disappeared in March 2014 with 239 people on board while en route from Kuala Lumpur to Beijing.

No sign of the Boeing 777 jet was found in a search of the southern Indian Ocean and the Australian-led hunt, the largest in aviation history, was suspended last year.

Three confirmed fragments of MH370 have been found, all on western Indian Ocean shores.

The search restarted in January, in an area north of the original zone that scientists now believe is the likeliest crash site. A private vessel is scouring the seabed, commissioned by Malaysia on a "no find, no fee" basis.

Tun Dr Mahathir, 92, who is leading an opposition bid to topple Prime Minister Najib Razak in elections due this year, said he did not believe Kuala Lumpur was involved in any cover-up. 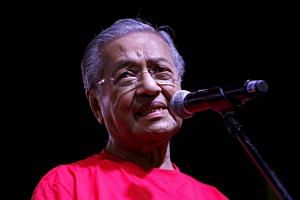 But he told The Australian newspaper in an interview that it was possible the plane might have been taken over remotely.

"It was reported in 2006 that Boeing was given a licence to operate the takeover of a hijacked plane while it is flying so I wonder whether that's what happened," said Dr Mahathir.

"The capacity to do that is there. The technology is there," he added of his theory.

Reports say Boeing in 2006 was awarded a US patent for a system that, once activated, could take control of a commercial aircraft away from the pilot or flight crew in the event of a hijacking.

There is no evidence it has ever been used in airliners due to safety concerns.