KUALA LUMPUR • As Malaysia's election campaign enters its final stretch before Polling Day on May 9, there are concerns that the country's political and economic stability are at stake.

There are many unknowns heading into the most keenly contested general election, where nearly 15 million Malaysians will decide on who they want to represent them in the 222 seats in the federal Parliament and 505 state assembly seats in 12 states. State assembly elections are held separately in Sarawak.

Here is what is known.

Never before has BN and its most dominant political entity, the established United Malays National Organisation (Umno), faced such a formidable line-up of opposition forces.

Tun Dr Mahathir, who is showing no signs of slowing down at the age of 92, has galvanised the opposition coalition and is posing a serious threat to Umno-led BN, particularly in the all-important battle for votes in the rural ethnic Malay constituencies that will determine the outcome of this election.

This unprecedented face-off is threatening to suck South-east Asia's fourth-largest economy into a political maelstrom, with many Malaysians wondering whether the polls will even lead to a new government. The likelihood of a hung Parliament looms large.

Another unknown in the upcoming polls is the adverse blowback that this very close and competitive contest for power will produce.

The stakes are very high for the chief protagonists on both sides of the political divide, and any outcome could mean serious repercussions in this winner-takes-all election battle.

Datuk Seri Najib, 64, who has so far withstood the headwinds from the multi-billion-dollar scandal at state-owned fund 1Malaysia Development Berhad (1MDB), is fighting for his political life in the coming election. A decent victory would amount to a vindication from Malaysians over the fallout from the saga and help him shore up his position within Umno.

On the other hand, a weak showing by Umno and BN or, worse still, a loss, would make Mr Najib's position extremely precarious. 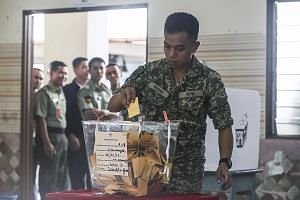 5 Things to know about the polls

There are also major risks for Dr Mahathir and his band of supporters, who abandoned Umno over disagreements with Mr Najib's handling of the 1MDB affair, to form their breakaway Parti Pribumi Bersatu Malaysia. Their caustic election campaign against BN has led to so much bad blood that any election outcome will likely produce some serious score-settling after the polls.

The only certainty is that Malaysia's politics is headed for a bumpy ride that is likely to roil its stock market, weigh down on the ringgit, and put foreign and local investors on edge until the country's political outlook becomes clearer.

A comfortable victory for Umno and BN ranks as the least likely outcome for Malaysia's 14th general election since independence in 1957.

Since 2008, BN has suffered a major drop in popular support. After losing its customary two-thirds majority in Parliament, and political power in the state assemblies of two of the nation's most economically advanced states, Selangor and Penang, Malaysians followed up in 2013 by denying BN the popular vote.

Mr Najib's hold on power has been on the back of the country's electoral system, which is heavily tilted towards small, mainly Malay, rural constituencies that have long backed Umno. While Umno and BN have pushed ahead with the controversial remapping of constituencies to boost its electoral chances in rural Malay-dominated areas, the so-called "Mahathir factor" has emerged as a potential spoiler because of the respect and pull that the former premier continues to enjoy with rural communities.

Deep fissures in the Malay community will deprive BN and Umno of a comfortable victory.

A highly probable outcome in the election is that Umno-led BN's grip on power will slip further but not by enough to boot it out of power.

The opposition alliance built around Dr Mahathir is likely to wrest more parliamentary seats and even control of state assemblies in potential swing states such as Kedah and Sabah, but with BN still holding on to government with a majority of around 120 seats in the 222-member Parliament.

Such an outcome would spell trouble for Mr Najib. Should his Umno party lose significant ground in the Malay heartland, it could touch off a revolt within the party against the premier.

A slim victory is also certain to spotlight deep flaws in Malaysia's heavily gerrymandered electoral system, because Umno and BN could secure a slim parliamentary majority with around 40 per cent of the popular vote. That in turn would raise serious legitimacy issues over BN's continued hold on power, and provoke the Dr Mahathir-led opposition to take to the streets, further raising already high political temperatures.

Private assessments from the opposition are pointing towards a hung Parliament, where Umno and its allies in BN would secure control of about 106 parliamentary seats and Dr Mahathir's PH coalition would win another 104 constituencies. The remaining 12 seats are expected to be taken up by the Islamic-based opposition Parti Islam SeMalaysia and the newly established Parti Warisan Sabah.

This will likely set the stage for a period of political jockeying that would last for weeks, with BN still having the upper hand.

That is because the Malaysian Constitution stipulates that the King shall first appoint as prime minister a Member of Parliament who in his judgment is likely to command the confidence of the majority of the members of the House. That prerogative will likely to go to BN because the coalition is widely expected to dominate the House with the single largest block of seats.

Umno candidates won 88 parliamentary seats in the 2013 election and many analysts expect Mr Najib's party to emerge from the election with a minimum of 70 seats. Under this situation, party discipline on both sides of the political divide will be key because attempts to buy over candidates will go into overdrive. Malaysia's Constitution allows elected MPs to switch parties while still retaining their seats.

A victory for the opposition would throw Malaysia into uncharted territory because the country has never witnessed a handover of political power at the national level. And it is very likely that BN would not surrender power without some serious resistance.

The opposition coalition would also have to endure unstinting attempts by its political opponents to break up its ranks by inducing its elected candidates to abandon ship. There will also be constitutional hurdles that PH must overcome before it can assume power legitimately.

Against this backdrop of political upheaval in Malaysia, the ruling BN could move to suspend parliamentary democracy to pave the way for a national emergency, pushing the country further into political limbo.

Faced with such huge odds, the challenge for the ideologically diverse PH would boil down to whether it can hold on tight to its simple majority in Parliament until the coalition is sworn in as the new government.

A version of this article appeared in the print edition of The Sunday Times on May 06, 2018, with the headline 'Possible outcomes of the May 9 election'. Subscribe
Topics:
More
Whatsapp Linkedin FB Messenger Telegram Reddit WeChat Pinterest Print Purchase Article Copy permalink