Acting Umno head seen as credible by many, appeals to different races: Poll

KUALA LUMPUR • Malaysia's former ruling coalition Barisan Nasional (BN) will likely win today's by-election in Rantau, Negeri Sembilan, a survey has said, because of its coordinated campaign over the past two weeks and the popularity of its candidate, Datuk Seri Mohamad Hasan.

In a statement posted on its website on Thursday, research outfit Ilham Centre said Mr Mohamad, Rantau's three-term assemblyman, was likely to win the state seat again because he was seen as credible by more than 80 per cent of the 369 respondents surveyed and he appealed to voters of different races.

His main rival for the Malay-majority seat is a relative unknown from ruling alliance Pakatan Harapan (PH) - Dr Streram Sinnasamy.

The other two candidates are independents Mohd Nor Yassin and Malar Rajaram.

The polls are being held today after the election court annulled the results of last May's general election, which saw Mr Mohamad win uncontested after Dr Streram was denied entry to the nomination centre for not having an Election Commission pass.

The outcome of the race in Rantau carries major implications for both sides.

PH has lost the last two by-elections this year - in Cameron Highlands and Semenyih - and a third consecutive by-election defeat will be seen as further proof that its Malay support is ebbing. 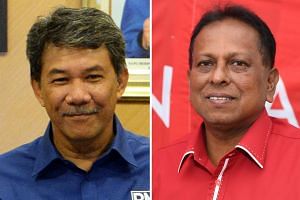 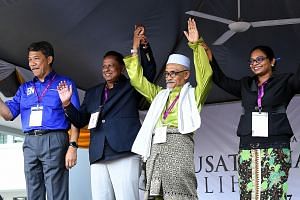 Rantau by-election: PH, Umno to slug it out in 'must-win' contest

By fielding Dr Streram, PH hopes to court Indians, who make up 27 per cent of Rantau's nearly 21,000 voters. Chinese voters make up another 19 per cent of the electorate.

PKR is a member party of PH.

"Although PKR has an Indian candidate, it's not automatic that the Indian voters will support him," Mr Shamsul Amri Baharuddin, director of Universiti Kebangsaan Malaysia's Institute of Ethnic Studies, told The Malaysian Insight. "This is because Tok Mat has been representing Rantau for a long time and he is perceived as someone who serves," he said, using the common moniker for Mr Mohamad.

Campaigning over the past fortnight has been seen as a battle for Malay leadership between prime minister-in-waiting Anwar - who is MP for Port Dickson in Negeri Sembilan - and Mr Mohamad, a Rantau native who had been the Negeri Sembilan Menteri Besar since 2004.

Still, some analysts say Rantau will not be a shoo-in for BN.

Mr Mazlan Ali, senior lecturer at Universiti Teknologi Malaysia's Perdana Centre, told The Malaysian Insight that BN will need a high voter turnout to win comfortably. "The chances are even. If PH gets 13 per cent to 15 per cent of the Malay votes and retains the Chinese and Indian vote, it can pull off a narrow win. Voter turnout will influence the result," he said.

Meanwhile, former Malaysian prime minister Najib Razak - a major presence in BN's successful outings in Cameron Highlands and Semenyih - has been absent from its campaign trail in Rantau as the criminal trials against him for corruption get under way.