Neither Mr Pompeo nor Tun Dr Mahathir made any public remarks as they shook hands at Dr Mahathir's office, where Mr Pompeo's aides said he intended to congratulate the prime minister on his coalition's victory.

Malaysia is Mr Pompeo's first stop in a three-day trip to Asia in which he plans to press for continued sanctions enforcement against North Korea and provide assurances that Washington still values its ties in the region after withdrawing from the Trans-Pacific Partnership free-trade agreement.

In a speech in Washington on Monday, he reiterated the argument often made by Mr Rex Tillerson, his predecessor, that China offers countries a poor deal because it primarily provides loans, while the United States gives a more sustainable alternative through direct aid and private investment.

Mr Pompeo is the first senior US official to visit Malaysia since surprise election results in May brought an opposition government to power pledging to tackle corruption. The election unseated decades of rule for the Barisan Nasional coalition, in what has been heralded as one of the few and unexpected democratic victories in South-east Asia.

Mr Pompeo met with the Prime Minister, a 93-year-old fiery politician who once again is leading Malaysia after a 22-year tenure at its helm from 1981 to 2003.

Dr Mahathir leads the Pakatan Harapan opposition coalition that now governs Malaysia, partnering with politicians who were locked up under the government he had led previously. He ousted Najib Razak, once his protege, who Dr Mahathir believed had become corrupt and had an unchecked hold on power. Najib is under investigation in connection with the disappearance of billions of dollars from state investment fund 1MDB.

Although Dr Mahathir has long been a critic of the US and the West - he has said that he is in no hurry to meet President Donald Trump, labelling him volatile - analysts say that his return as Malaysia's prime minister will benefit the nation's relationship with the US.

Mr Pompeo's visit will allow the US "to strengthen its relationship with Malaysia, unencumbered by Najib's corruption," said Mr Ian Storey, a senior fellow at the Institute of South-east Asian Studies in Singapore.

Mr Pompeo planned to talk with Dr Mahathir about the Trump administration's Indo-Pacific strategy, with its vision for an "open, transparent, rules-based region" that Mr Pompeo outlined Monday in his speech.

"Secretary Pompeo is arriving in Kuala Lumpur with 2018 in mind," said a senior State Department official travelling with Mr Pompeo. "There's a long history in both countries. We have a comprehensive partnership with many areas of cooperation." 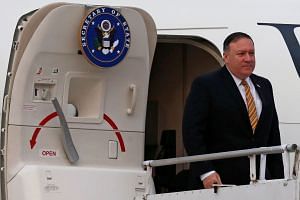 Malaysia's new government takes a critical eye toward China's state-backed projects, and that provides the US with an opportunity.

Before his trip, Mr Pompeo announced US$113 million (S$155 million) in direct government investment to the Asia-Pacific region focused on technology, energy and infrastructure. It is an answer to China's Belt and Road Initiative, which has provided billions in funding for infrastructure and other big-ticket projects throughout the region.

The plan Mr Pompeo announced will more than double the US government's development finance capacity, which could be provided as loans to private companies in the region.

Under Malaysia's former government, China signed agreements for several infrastructure projects, including a rail link and two gas pipelines. A number of these Chinese-backed projects - US$23 billion worth - have now been suspended, as Mahathir's government questions their value and tries to tackle Malaysia's fiscal woes.

Later on Friday, Mr Pompeo will travel to Singapore for a meeting of the Association of South-east Asian Nations. Also attending will be North Korean Foreign Minister Ri Yong Ho, leading to speculation that the two may hold a private bilateral meeting to discuss stalled negotiations over Pyongyang's nuclear programme.

Iranian Foreign Minister Mohammad Javad Zarif also will be in Singapore to sign a cooperation agreement with ASEAN, but State Department officials have played down the potential for any sideline talks with Mr Pompeo.