Arrest warrants have been filed against two men from southern Thailand over a string of bomb blasts that rocked Bangkok last week, in a case that police admitted was difficult because of the "professional nature" of the attacks.

The duo, who have been detained since Aug 2, are likely to be just foot soldiers in the entire bombing incident, the police admitted at a press conference yesterday.

"All the devices we found - both the ones that exploded as well as the ones that started fires - worked with time-delay devices," Police Lieutenant-General Suwat Chaengyotsuk, an assistant to the national police chief, said yesterday, highlighting the coordinated nature of the attacks.

"Those arrested are on the lowest rung in the chain of command. We need to find the masterminds, but it's not easy."

Two suspicious objects were left outside the Thai police headquarters in Bangkok on Aug 1, causing a brief scare, as foreign ministers from around the world convened in the capital for the annual Asean Foreign Ministers' Meeting and related forums.

The next day, at least six blasts and four fires occurred in various spots, including outside the Government Complex on the outskirts of Bangkok and in front of the Ministry of Defence.

Other scares unfolded throughout the week: On Sunday, two small home-made bombs were found outside a convenience store in Nonthaburi province bordering Bangkok. One of them exploded, while the other was defused by bomb experts.

On Wednesday, an unexploded firebomb was reportedly discovered buried beneath piles of clothes in the bustling Pratunam market.

Security has been stepped up in the capital. 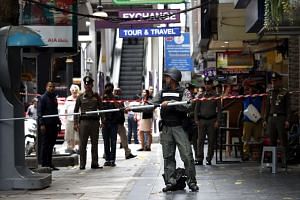 Police said it was likely more than 15 people had carried out the attacks, but refused to disclose how many had been detained in this investigation.

Deputy Prime Minister Prawit Wongsuwan had said on Tuesday that the blasts were "linked to a southern group", but the police declined to confirm if the attacks had any connection with the unrest in Thailand's southern border provinces, where a separatist insurgency has claimed over 6,000 lives since 2004.

The two arrested, Look-ai Saengae, 22, and Wildon Maha, 29, are both natives of the Malay/Muslim-majority Narathiwat province.

"There is evidence that (they) entered Bangkok using public transport, disguised themselves by changing clothes in several spots before planting the bombs and escaping," a police statement said.

Police Lt-Gen Suwat said: "It's possible that this is linked to the incidents in the south but we will not state so until we have evidence."

Human rights activists have raised questions about the manner in which the suspects were detained. Look-ai Saengae and Wildon Maha were detained by the police in Chumphon province last Friday and taken to Yala province for questioning. It was not until Monday that they got to see their relatives and attorneys.

Police said they were arrested under the Emergency Decree, which has long been in place in the southern border provinces of Pattani, Yala and Narathiwat, and allows a suspect to be held in an unofficial detention centre for seven days with court permission.

But the Emergency Decree is not in place in Bangkok nor Chumphon, raising the question of whether the police had abused their powers, said advocacy group Thai Lawyers for Human Rights in a statement on Wednesday.