KUALA LUMPUR (THE STAR/ASIA NEWS NETWORK) - Malaysia's police did not steal RM43.3 million (S$14.3 million) of the cash seized in raids at various premises linked to former prime minister Najib Razak in May, as alleged by a blogger.

Datuk Seri Amar, who is director of the Commercial Crime Investigation Department (CCID) said, "I will not pay heed to such a writer. He has branded himself an 'investigative journalist' but he's more like a mercenary writer."

"His allegation is baseless. If he (Raja Petra) really has credible information, then be brave enough to lodge a report in Malaysia. Don't hide behind a cyber curtain," Commissioner Amar told a press conference at the CCID headquarters on Friday (Sept 28).

He said that Mr Raja Petra is basing his allegation on the different amounts of seized cash that were announced at a series of press conferences on the investigation.

Setting the record straight, he said he had initially announced during a May 25 press conference that some RM114 million was seized from an apartment at Pavilion Residences in central Kuala Lumpur. The police had raided six premises linked to Najib, as part of their probe into troubled state fund 1Malaysia Development Bhd.

"However, after all the cash had been rounded up from six premises linked to the former prime minister, the tallied amount of cash seized was RM116 million, as announced during my June 20 press conference. 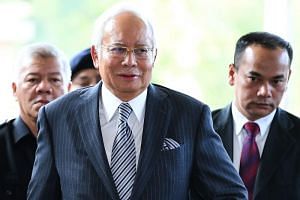 "He (Najib) then lodged a report that some RM160 million was actually seized but he could not substantiate it," he said.

Mr Amar said he was 100 per cent sure that the cash that was recovered from the raids was the same amount seized by the police.

"I am not taking lightly any party accusing the police of stealing money.

"I urge Raja Petra to come forward and lodge a report. If the report turns out to be false, then he will face the full brunt of the law," he said.

Mr Amar also told reporters that more people will be called up in the police investigation into 1MDB, including Najib and his wife Rosmah Mansor.

He confirmed that former 1MDB chief executive officer and president Arul Kanda Kandasamy had been called in for questioning twice in the past few days.

"We have recorded the statements of about 70 people. More will be called in soon, including Datuk Seri Najib Tun Razak and Datin Seri Rosmah Mansor," he said.

On Sept 20, Najib claimed trial to 25 charges of graft and money laundering, relating to transactions amounting to RM2.3 billion which were believed to be linked to 1MDB. He was also charged in July with criminal breach of trust and abuse of power relating to RM42 million allegedly paid into his bank accounts from SRC International, a former 1MDB subsidiary.

Najib has pleaded not guilty to all the charges.