PUTRAJAYA • Malaysian Prime Minister Mahathir Mohamad is unperturbed by the sudden popularity of his predecessor, Najib Razak, on social media.

Tun Dr Mahathir, who is Pakatan Harapan chairman, said Najib was not a threat to the coalition and the government had allowed him to continue to give speeches.

Najib currently faces dozens of criminal charges linked to scandal-ridden state fund 1MDB, including allegations of money laundering, criminal breach of trust and abuse of power. He has denied any wrongdoing.

The Pekan MP stepped down as prime minister and president of former ruling party Umno after his Barisan Nasional alliance was defeated in last May's general election, but continues to be a visible presence as a member of the opposition.

"He seems... (to be) gaining popularity on social media because he provides a lot of stories," Dr Mahathir told reporters at the Perdana Leadership Foundation last Friday.

He also dismissed Najib's attacks on the government, especially on the continued decline of the Malaysian ringgit.

"The ringgit did not fall, the real problem is the USD (US dollar) has strengthened. We are trying to further strengthen it (the ringgit) and this should not be used as an accurate measure to determine the country's economic performance. 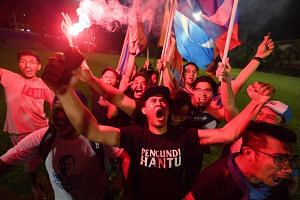 From Najib to Mahathir

Malaysian PM Mahathir disappointed with ex-PM Najib, says he is unlike his father Razak

"Why didn't he do all the things he asked us (the government) to do when he was in power?" he said.

"If he had done all those things he told us to do, he would still (be) the prime minister."

In a Facebook post, Najib has expressed concern over the continued decline in the ringgit despite oil prices strengthening.

Najib said this bucked previous trends when the ringgit would move in tandem with global oil prices.