Five days after the ICC launched a preliminary examination of the alleged murders, authorities said the number of suspects shot dead by law enforcement personnel had risen to more than 4,000.

Critics allege the fiery Duterte, who has vowed to kill tens of thousands of criminals to rid Philippine society of drugs, is goading police to murder suspects through inflammatory statements.

"We are confident that this time, police-intensive operations against illegal drugs will be carried out with greater efficiency and with less violent confrontations between law enforcers and offenders," national police spokesman John Bulalacao said.

While the campaign is not expected to be entirely "bloodless", the government has adopted certain measures - including more training and body cameras - to minimise bloodshed, Bulalacao told a news conference.

Duterte suspended police participation in the crackdown twice last year due to controversial killings that led to a public backlash against his anti-narcotics campaign. 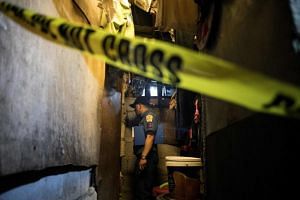 The ICC's initial inquiry is designed to help prosecutors determine if there is enough evidence of crimes that fall into its jurisdiction. It could lead to a full probe and eventually charges.

The mass-murder complaint filed at the ICC by a Filipino lawyer last year alleges around 8,000 extrajudicial killings, while human rights groups estimate the actual toll is now more than 12,000, some of them assassinated by suspected vigilantes.

Activists allege police break down doors in slums and kill defenceless people, then plant guns and drugs on the bodies. Authorities are also accused of hiring assassins.

Duterte says he has not given any illegal orders to police, and that it is his constitutional duty to protect citizens. While police claim the suspects killed had all resisted arrest and opened fire first, leaving them no option but to use deadly force.

The president also said last week he was outside the ICC's jurisdiction and told its chief prosecutor not to proceed, warning: "You will get your comeuppance." Philippine Drug Enforcement Agency spokesman Derrick Carreon told the news conference Wednesday that police killed 4,021 "drug personalities" between July 1, 2016 - Duterte's first day in office - and February 8 this year.

In the three weeks since the last official body count was announced, 34 suspects were killed.

Bulalacao said authorities were investigating an additional 1,749 homicide cases that the police suspect are "drug-related".