MARAWI, Philippines (AFP) - Philippine authorities on Tuesday (May 30) urged Islamist militants occupying parts of a southern city to surrender for the sake of trapped civilians, as attack helicopters pounded the gunmen's strongholds with rockets.

More than 100 people have been confirmed killed in the fighting, which began on Tuesday last week when gunmen waving black flags of the Islamic State in Iraq and Syria (ISIS) group rampaged through the mostly Muslim-populated city of Marawi.

President Rodrigo Duterte declared martial law across the entire southern region of Mindanao, home to roughly 20 million people, in response to the crisis as he warned that local militant groups were uniting behind ISIS and becoming a major security threat.

But the militants, initially estimated by the defence chief to number just 100, have withstood eight days of intense air assaults and street-to-street combat, prompting the government's surrender calls on Tuesday.

"We are giving those inside an opportunity to surrender. There is still a chance to lay down your arms," military spokesman Brigadier-General Restituto Padilla said on DZBB radio.

"If you do that, it will be better so no one else will be dragged into this, no more buildings will be destroyed." 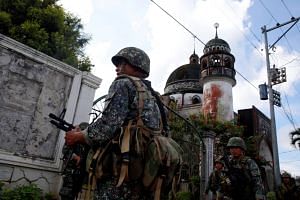 Most of Marawi back in government control, says Philippine military

Asked why the government had issued a surrender call, presidential spokesman Ernesto Abella said: "To lessen the damage on the ground, definitely so the civilians will be less affected".

Up to 2,000 residents are trapped in areas held by the militants, according to the local government, and the International Committee of the Red Cross has voiced alarm that they will be caught in the bombing raids or crossfire.

The militants also took a priest and up to 14 other people hostage at the start of the crisis, and their fate remains unknown.

Helicopters fired rockets on a pocket of the city held by the militants throughout Tuesday morning, and black smoke rose from the buildings that were apparently hit, according to an AFP reporter in Marawi.

The Philippine military has said the gunmen are being backed by foreign militant fighters, including Malaysians, Indonesians and Singaporeans.

The violence began when dozens of gunmen went on the rampage in response to an attempt by security forces to arrest Isnilon Hapilon, a veteran Filipino militant regarded as the local leader of ISIS.

Hapilon, a senior member of the Abu Sayyaf kidnap-for-ransom gang, is on the US government's list of most-wanted terrorists.

He was being protected in Marawi by the local Maute group, which has pledged allegiance to ISIS.

More than 100 inmates of two Marawi jails escaped at the start of the conflict. The military said some of the escapees may have joined the fighting.