MANILA/THE HAGUE (REUTERS) - Philippines President Rodrigo Duterte said on Thursday (Nov 17) that he might follow Russia and withdraw from the International Criminal Court (ICC) in response to Western criticism of a rash of killings unleashed by his war on drugs.

Duterte said the ICC was "useless" and expressed frustration about the West's allegations of extrajudicial killings and failure to understand the reasons for his crackdown.

On Wednesday, Russian President Vladimir Putin removed Russia's signature from the founding treaty of the ICC, which it never joined. 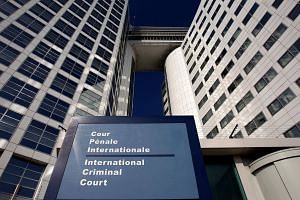 Duterte said he might consider the more drastic step of quitting a court the Philippines joined in 2011.

"They are useless, those in the international criminal (court). They (Russia) withdrew. I might follow. Why? Only the small ones like us are battered," Duterte said before his departure for Lima to attend an Asia-Pacific summit.

An ICC prosecutor last month said the Hague-based tribunal may have jurisdiction to prosecute the perpetrators of killings in the Philippines' drug war, in which more than 2,400 have been killed.

A Philippine diplomat addressing the court's general assembly in The Hague later on Thursday said his delegation was still awaiting instructions from Duterte regarding his country's future relationship with the ICC.

"We have a functioning judicial system," said Leo Tito Ausan, arguing that domestic authorities should be given time to investigate and prosecute under the principle that the ICC acts only if local authorities are unable to do so.

"None of this would have happened if the prosecutor had exercised more prudence," said lawmaker Harry Roque. "I think the prosecutor was terribly out of line... the ramification now is that no other state in Asia would want to ratify the ICC."

The court is already reeling from withdrawals by some of the African states that make up a third of its membership, many of whom complain it has unfairly singled out Africans for prosecution.

Duterte is seeking a meeting with Putin in Lima this weekend. He is pursuing an independent foreign policy aimed at weaning the Philippines off dependence on longtime ally the United States and called for new global leadership.

"You know, if China and Russia would decide to create a new order, I will be the first to join," he said.