"They will pay. When the time comes, I will eat you in front of people," Mr Duterte told an audience of Filipinos late on Monday (Sept 5) night while in Laos for a regional summit. "If you make me mad, in all honesty, I will eat you alive, raw."

"I will really carve your torso open. Give me vinegar and salt and I will eat you. I'm not kidding," Mr Duterte said, according to an official video of his speech posted on Tuesday (Sept 5). "These guys are beyond redemption."

Mr Duterte often hurls abusive insults at critics and is waging a brutal war on crime in which nearly 3,000 people have been killed since he took office on June 30.

His aides often urge reporters against taking Mr Duterte's comments literally, cautioning that the 71-year-old former lawyer speaks in a crude language of the people.

During the election campaign earlier this year, Mr Duterte attracted widespread criticism for saying he had wanted to rape a "beautiful" Australian missionary who had been sexually assaulted and murdered in a Philippine prison riot. 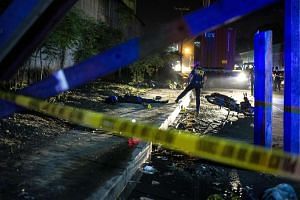 Mr Duterte on Monday offered a particularly vivid description of how he would like to eat Abu Sayyaf militants, who killed 15 soldiers last month and are accused of a bombing in his home city last week that claimed 14 lives.

The Abu Sayyaf are a small band of Islamic militants based on remote southern islands of the mainly Catholic Philippines and are listed by the United States as a terrorist organisation.

They are notorious for kidnapping foreigners to extract ransoms, and this year beheaded two Canadian hostages.

Mr Duterte also on Monday caused a major diplomatic rift with the United States after branding President Barack Obama a "son of a whore" who would wallow like a pig.

Mr Duterte made the remarks in response to comments by Mr Obama's aides that the US president would raise concerns about the Philippine war on crime when the pair met in Laos.

Mr Obama abruptly cancelled the meeting, which was scheduled for Tuesday, because of the tirade.