MANILA (REUTERS) - The Philippines' police chief broke down before a Senate inquiry on Wednesday (Nov 23) and vowed to stand by President Rodrigo Duterte and his deadly war on drugs after a narcotics kingpin testified to entrenched police involvement in the illicit trade.

Amid high drama in the televised hearing, an emotional Philippine National Police Director General Ronald dela Rosa grimaced and held back tears in animated remarks in which he promised to rid police ranks of crooked elements.

Director General Dela Rosa, a stocky, celebrity-like general nicknamed "Bato"(Rock), was responding to hours of testimony from Kerwin Espinosa, a confessed drugs dealer and son of a mayor who was shot dead last month by police while in prison on remand for narcotics links.

"I will not surrender, I will clean up the national police," Director General Dela Rosa told senators.

"I will be with you," Director General Dela Rosa said of Mr Duterte. "I will not abandon this fight even if the public is losing trust in the police."

Parallel probes by both chambers of the Philippine legislature have been largely drab, though sometimes highly dramatic.

In September, a self-proclaimed hit man testified to having heard Mr Duterte order assassinations and to having watched him kill a man with a machine gun while a mayor in 1993. Mr Duterte has rejected that as lies.

Close to 2,500 people were killed in the first four months of Mr Duterte's presidency, mostly in police operations and others by suspected vigilantes.

Mr Duterte has resolutely defended the police and is outraged by Western and activist concerns that extrajudicial killings could be taking place.

Espinosa, who arrived at the hearing wearing a flak jacket, confessed to dealing in drugs and to paying police protection money. He accused two generals and numerous officers on his turf of complicity.

Director General Dela Rosa vowed to do everything to stop it. "I'm not superman, I'm an ordinary policeman," he said. "But I'll do my best to clean the police force even if it will cost my life. We will survive this."

It did not stop there. Mr Duterte has humiliated Ms De Lima during speeches, accusing her of adultery, making a sex tape of her affair with her driver and bagman, and even recommending she hangs herself. 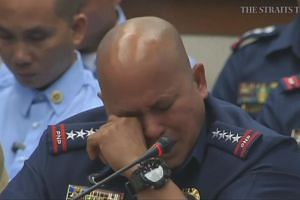 Though she has admitted to the affair, she has rejected testimony by a string of criminals linking her to drugs deals.

Espinosa also implicated Ms De Lima on Wednesday, saying he paid protection money to her driver on four occasions when she was in the Cabinet.

In an interview last week, Ms De Lima told Reuters she feared for her life, having stood up to a president who had a following of "diehard fanatics".

"The president has a personal vendetta against me, and then it got worse because of my initiative... the Senate enquiry, into the extra-judicial killings," she said. "He has staged all of these personal attacks, revealing even my personal private life and portraying me as an immoral woman so that people would no longer believe me."