LEGAZPI, Philippines (AFP) - Philippine authorities said on Thursday (Jan 25) they will remove by force people who have refused to leave a no-go zone around an erupting volcano, as they seek to avoid casualties after tens of thousands of others fled to safety.

There have been no deaths in the 10 days since Mount Mayon began belching flaming lava, superheated rocks and ash, causing 75,450 residents to flee surrounding farms and communities, civil defence officials said.

However, they said people have been leaving the shelters in daytime to tend to their farms and livestock inside the danger zone that now extends to 9km from the crater.

Ms Maria Evelyn Grollo, who runs a school-turned-shelter for more than 4,000 people on the outskirts of Legazpi, said these people were defying the city mayor's order to stay away from farms on Mayon's lower slopes.

"In the mornings they go home, especially the men. But in the evenings they are here," she told AFP, adding they easily cross into the danger zone on their motorbikes.

Ms Eileen Nunez, a university student staying at a Legazpi shelter, said her farmer father was among them.

"We have animals there... You can't just leave your livestock behind," she told AFP, adding the family could not afford to abandon its tomato, bitter-gourd and eggplant crops either since they were not yet ready for harvest.

Mr Akim Berces, operations officer of the regional civil defence office in Legazpi city, told AFP police patrols are guarding the abandoned farms and homes, so people should not go back, adding there have been no reports of looting.

A number of residents there were also refusing to leave, he said. 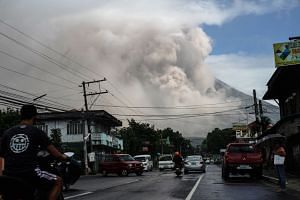 "The security (officials) are already talking about it, how they will ensure that it should be a no-man's land," he said, adding officials are mulling over "forcing" residents to head for the shelters.

Mr Berces said the authorities had prepared a designated evacuation centre for farm animals and wanted cattle, pigs, goats, and chickens to be moved there.

Ms Nunez, the student, said living conditions at the schoolroom where her family now stays with 14 other families were better than other shelters where people had complained about a lack of toilets, though it was still a far cry from home.

The 19-year-old said she carries her own pail of water and joins a long queue to wash herself at the common bathroom. She stands in another line for food rations.

"It gets hot here. There is not much to do except homework from school," she added.

With 51 eruptions in the past four centuries, Mayon, a near-perfect 2,460m cone about 330km south-east of Manila, is the most active of the country's 22 volcanoes.

The authorities have closed airports in the region, while periodic ash showers have made driving on some roads nearly impossible. Local governments have advised residents to wear facial masks and goggles.

Mayon continued hurling red-hot lava and ash plumes into the sky in the past 24 hours, accompanied by hot ash, lava and rocks rolling down its flanks, the state volcanology office said.

Despite the danger, hundreds of tourists, including Westerners, are flocking to Legazpi and nearby towns to watch the spectacular eruption up close, provincial tourism officer Dorothy Colle told AFP.

"It's a unique phenomenon. It attracts visitors. It's just that the numbers are not that big because we were affected by the closure of the airport," she said, with eight daily flights from Manila and Cebu city shut down.