MANILA (REUTERS) - The Philippine military said on Thursday (Aug 2) it has arrested a Muslim cleric who knew in advance about a bomb that killed 11 people on Basilan island in an attack earlier this week that raised fears of the Islamic State in Iraq and Syria's (ISIS) involvement.

Acting on a tip off, scout rangers raided the home of Indalin Jainul, alias Ustadz Abdulgani, 12 hours after Tuesday's bombing in Lamitan town.

Informants told the army that the cleric, 58, knew the bomb would go off and had been helping foreign operatives reach Basilan from Malaysia, according to army spokesman Gerry Besana. A grenade was found at his home.

Jainul is charged with multiple murder and illegal possession of explosives. His family protested what they said were trumped-up charges.

ISIS claimed responsibility for the attack which killed five militias, a soldier, and four civilians, including a child, calling it a "martyrdom operation".

The driver of a van carrying the device also died. He was believed to have detonated the device when questioned at the checkpoint.

Basilan is a stronghold of the Abu Sayyaf, a group better known for its banditry and kidnapping, though it has pledged loyalty to ISIS. 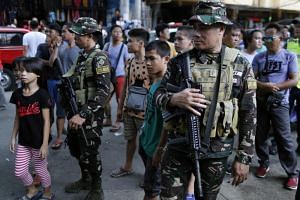 War on terror in Philippines enters a deadlier phase

The attack came days after Philippine President Rodrigo Duterte made peace overtures towards the Abu Sayyaf, following his approval for an autonomy plan sought for decades by leaders of the region's Muslim minority.

Vehicle bombings are rare in the Philippines, despite decades of separatist and Islamist violence that have destabilised the southern Mindanao region.

Security experts say that although ISIS has no known affiliate in the southern Philippines, it has ties with local extremists who have given refuge to foreign radicals, particularly from Malaysia and Indonesia.