MANILA (AFP) - An average of 44 people are being killed each day in Philippine President Rodrigo Duterte's war on crime, according to police data released on Tuesday (Sept 6) that showed the death toll surging to nearly 3,000.

Police have killed 1,033 people in anti-drug operations since Mr Duterte was sworn into office just over two months ago, according to the national police update on Tuesday.

Another 1,894 people have died in unexplained deaths, the police said, which rights groups believe are largely due to out-of-control security forces and hired assassins.

The total of 2,927 is more than 500 higher than the figure released by the police on Sunday, and equates to an average of 44 a day since Mr Duterte took office on June 30.

The new figures came after Mr Duterte vowed on Monday to defy a wave of international condemnation and continue killing until every drug trafficker in the Philippines was dead.

"More people will be killed, plenty will be killed until the last pusher is out of the streets," said Mr Duterte, who scored a landslide election victory in May largely on his promise to fight crime. "Until the (last) drug manufacturer is killed, we will continue and I will continue."

US President Barack Obama was planning to raise concerns about the war on crime with Duterte at a meeting in Laos on Tuesday afternoon. 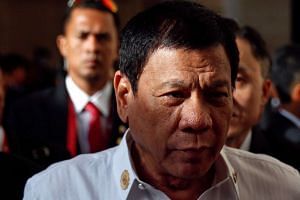 But Mr Obama cancelled the meeting after Mr Duterte warned he would not be lectured to, and branded the US president a "son of a whore".

Philippine police insist they are killing only in self defence.

"They have guns, they are drug-crazed. Our policemen are just defending themselves," national police spokesman Dionardo Carlos told AFP.

Police chief Ronald dela Rosa has also regularly said the unexplained deaths are due to drug syndicates waging war against each other, rather than extrajudicial killings by vigilantes and others.

Still, Mr Duterte has promised to protect police from prosecution if they are charged over the deaths and insisted human rights cannot get in the way of his war.

He has also urged ordinary Filipinos to kill drug addicts in their communities.

The United Nations special rapporteur on summary executions has warned incitement to kill is a crime under international law.

But Mr Duterte has told the United Nations not to interfere and said he will use all means necessary to eradicate drugs in society, which he insists is the nation's biggest problem.