Philippine security officials said yesterday they were checking reports that at least two Sri Lankans had slipped into the country to train local militants on bomb-making, even as one of them claimed a family feud had led to false accusations against her.

Mr Rommel Banlaoi, head of the Philippine Institute for Peace, Violence and Terrorism Research, told The Sunday Times that one of the Sri Lankans, Ms Victoria Sophia Sto Domingo, had met agents from the National Bureau of Investigation "to deny everything".

Pending that, the case remains under investigation.

"The information immediately available are reports coming from media. We already have some information that we are checking with another agency," he added.

Mr Banlaoi said Ms Sto Domingo had met government agents and had issued an affidavit saying that she, her fiance Mark Kevin Samhoon and her mother Anarkalie Dulara Palliyaguruge were being framed by an estranged relative over a grudge.

In the affidavit, a copy of which was obtained by The Sunday Times, Ms Sto Domingo said the kin had told the Philippine Bureau of Immigration that the three of them had ties to the National Thowheed Jama'ath, the terrorist group accused of carrying out the Easter Sunday attacks in Sri Lanka in April that killed at least 250 people.

Acting on that tip, the bureau issued advisories to airport officials flagging Ms Sto Domingo and Mr Samhoon as "suicide bombers", and Ms Palliyaguruge as their "financier". The advisories stated that Ms Sto Domingo arrived in the Philippines in November last year.

In an e-mail to The Sunday Times, Ms Sto Domingo said the false accusations were "a form of harassment towards me, my mother and my fiance due to a family feud".

She said she has been estranged from the relative since 2002.

"This is not the first time he has harassed or caused trouble in our lives using social media to bully me and my family," she added. 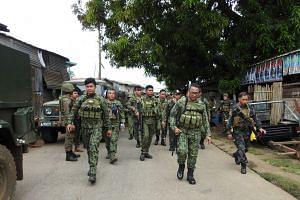 Terrorists from Sri Lanka slip into Philippines to prepare attacks

She also denied claims that she was involved in the suicide attack in January on a Roman Catholic cathedral in Sulu province. The attack killed 23 people and wounded at least 100.

In her affidavit, Ms Sto Domingo said she and Mr Samhoon are "born-again Christians", and her mother is Buddhist. "None of us have any connections with any terrorist group or terrorist activity."

Online news site BenarNews, citing military sources, had reported that two Sri Lankans were with a faction of Filipino militants on the main island of Luzon, purportedly planning to attack churches.

Pro-ISIS extremists from abroad had reportedly been sneaking into the Philippines to help militants mount attacks in densely populated cities far from their strongholds in the war-torn southern island of Mindanao.