MANILA (REUTERS) - Philippine President Rodrigo Duterte welcomes an investigation by the state's anti-corruption agency into allegations by a senator that he failed to disclose his wealth when he was a city mayor, his spokesman said on Wednesday (Sept 27).

The Office of the Ombudsman confirmed on Tuesday it has initiated an inquiry into activities in several of Duterte's bank accounts prior to him being elected president in May 2016. Duterte served as mayor, vice mayor and a congressman in Davao City for two decades.

"The president has nothing to hide," his spokesman, Ernesto Abella, said in a statement. "The president respects the internal processes of the Office of the Ombudsman as an independent body and trusts its impartiality in the conduct of its fact-finding duty."

The investigation was in response to a complaint by Senator Antonio Trillanes that Duterte had amassed 2.2 billion pesos (S$58.6 million) in three bank accounts between 2006 and 2015 when he was mayor, and had committed a criminal offence by failing to report that in his official assets declaration.

Duterte has sparred repeatedly with Trillanes, one of his staunchest critics, and recently alleged the senator had a number of secret overseas bank accounts. Duterte read out one Singaporean account number live on television.

After Trillanes took reporters to Singapore to prove no such account existed, Duterte admitted he had deliberately provided a false number, and gave a cryptic explanation for his reasons.

As president, Duterte has immunity from prosecution, but an investigation could provide grounds for impeachment. Political experts, however, say that scenario is highly unlikely given his immense popularity and control of the legislature.

Duterte has repeatedly said he would resign if there was proof of his wrongdoing. 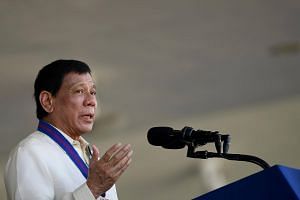 Deputy Ombudsman Carandang declined to provide details of the investigation but confirmed his office had received copies of Duterte's bank transactions, which he said showed more than a billion pesos went through those accounts over several years.

The accusations by Trillanes that Duterte had concealed assets was among a long list of allegations contained in an impeachment complaint against the president in March by another lawmaker, Gary Alejano. That was thrown out by lawmakers who found the complaint lacked substance.

Duterte, who claimed to be poor and of humble living when he campaigned for the presidency, on Tuesday said he had wealth from the sale of landholdings inherited from his father, a former governor and a Cabinet minister under late President Ferdinand Marcos. It was the first time Duterte had publicly mentioned such an inheritance.