DAVAO CITY, Philippines (REUTERS) - Philippine President Rodrigo Duterte said on Monday (Sept 5) that "plenty will be killed" before the end of his campaign against illegal drugs that has led to the death of about 2,400 people since he became president two months ago.

Mr Duterte will meet US President Barack Obama at a regional summit in Laos on Tuesday, although he has made it clear he will take no lecture on human rights from the US leader.

"Plenty will be killed until the last pusher is out of the streets. Until the (last) drug manufacturer is killed we will continue," he told reporters before leaving for Laos.

Police say about 900 of those killed died in police operations, and the rest were "deaths under investigation", a term human rights activists say is a euphemism for vigilante and extrajudicial killings. 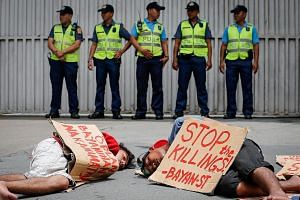 Mr Duterte, a former crime-busting mayor of southern Davao city, won the presidency in May promising to suppress crime and wipe out drugs and drug dealers.

While his campaign has won popular support, the killings have alarmed rights groups and brought expressions of concern from the United States, a former colonial power and a close Philippine ally, and the United Nations.

"I am a president of a sovereign state and we have long ceased to be a colony," Mr Duterte said, when asked about his meeting with Mr Obama.

"Who is he to confront me? As a matter of fact, America has one too many to answer for," he said. "Everybody has a terrible record of extrajudicial killings."

He earlier lambasted the United Nations after it criticised the surge in killings and he turned down a meeting with UN Secretary-General Ban Ki Moon at the summit in Laos.