DAVAO (AFP) - Philippine President Rodrigo Duterte on Saturday (Sept 3) morning declared a "state of lawlessness" in the southern city of Davao, announcing powers for the military to combat threats as he cancelled a trip to Brunei and branded the bombing of a night market in his home town on Friday night that killed at least 14 people an act of terrorism.

His security adviser said the announcing of the "state of lawlessness" gave the military extra powers to conduct law enforcement operations normally done only by the police.

"We will treat this as a police matter about terrorism," Mr Duterte told reporters early on Saturday morning after visiting the site of the bombing in the heart of Davao and close to one of the city's top hotels. The President has been monitoring the situation there with his cabinet and top security officials.

Presidential communications secretary Martin Andanar said that Mr Duterte's Brunei visit set for Sunday to Monday had been called off.

Mr Duterte, who took office two months ago, was initially scheduled to visit Bandar Seri Begawan as part of an inaugural trip to neighbouring countries.  He is still set to fly to Laos on Tuesday for a regional summit and to Indonesia on Thursday for a working visit, Mr Andanar said. 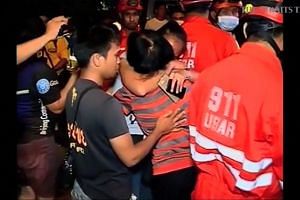 At least 14 dead in night market bomb blast in Davao 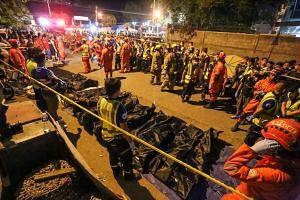 When asked who was responsible, Mr Duterte said the authorities had been expecting reprisals from the Abu Sayyaf Islamic militant group following a military offensive against it.

The Abu Sayyaf is a small but extremely dangerous group of militants that has declared allegiance to the Islamic State in Iraq and Syria (ISIS) and is notorious for kidnapping foreigners to extract ransoms. The group beheaded two Canadian hostages this year.

"I remember warning everybody that there could be a reprisal because of the operation there," Mr Duterte said.

At least 14 people were killed and another 67 were injured in the explosion, police said. Sixteen of the injured were in critical condition, a local hospital director told reporters.

"The force just hurled me. I practically flew in the air," Mr Adrian Abilanosa, who said his cousin was among those killed, told AFP shortly after the attack as bodies lay strewn amid broken plastic tables and chairs.

Davao is the biggest city in the southern Philippines, with a population of about two million people. It is about 1,500km from the capital of Manila.

The city is part of the southern region of Mindanao, where Islamic militants have waged a decades-long separatist insurgency that has claimed more than 120,000 lives.

Mr Duterte had been mayor of Davao for most of the past two decades, before winning national elections in a landslide this year and being sworn in as president on June 30.

While Davao has been regarded as relatively safe compared with other parts of Mindanao, the Abu Sayyaf and other Islamic militant groups have carried out deadly attacks there in the past.

The Abu Sayyaf claimed responsibility for three bomb attacks in 2005 - one in Davao, one in a nearby city and a third in Manila - that killed eight people.

The Abu Sayyaf said it conducted the 2005 attacks in response to an offensive against it at that time.

In 2003, two bomb attacks blamed on Muslim rebels at Davao's airport and the city's port within a month of each other killed about 40 people.

However, Mr Duterte on Saturday made clear the Abu Sayyaf was not the confirmed culprit, as he named the Maute gang - another small militant group based in Mindanao that has also declared allegiance to ISIS - as another suspect.

Mr Duterte also raised the possibility of drug lords carrying out the attack as a way of fighting back against his war on crime.

Mr Duterte has made eradicating illegal drugs the top priority of the beginning of his presidency.

Security forces have conducted raids in communities throughout the country to arrest or kill drug traffickers.

The United States, the United Nations and rights groups have expressed concern about an apparent wave of extrajudicial killings.