MARAWI, Philippines (AFP) - Loud explosions rang out in the now mostly deserted city of Marawi on Friday (June 2) as Philippine fighter jets launched fresh bombing runs in a bid to dislodge militants linked to the Islamic State in Iraq and Syria group.

Buildings burned after the raids, as ground forces shelled fortifications and tunnels in the eastern half of the mainly Muslim city, where up to 50 fighters are believed to be holed up.

Friday's fighting came as attention in the Philippines was focused on a casino in Manila, where a masked gunman set fire to gaming tables, igniting a blaze that left 37 people dead.

Authorities insisted the gunman, whom they said had committed suicide inside the leisure complex, was a robber, not a terrorist. The US-based Site Intelligence Group, which monitors extremist threats, had said ISIS-linked operatives were behind the attack.

In Marawi, the death toll from the 11-day-old conflict reached 175 as the military reported four fresh fatalities among its forces.

The toll includes 11 soldiers who were killed in friendly fire this week during a mis-targeted air strike. 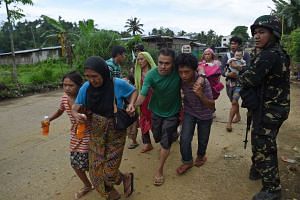 A total of 120 militant gunmen have been killed, including suspected foreign fighters, while the battles have also left at least 19 civilians dead.

Around 2,000 people remained trapped by the fighting, some of them being used by the militants as human shields, the military said.

The militants have also kidnapped a Catholic priest and 14 other people, whose fates are unknown. They have threatened to kill the hostages unless government forces pull back.

The Philippine government has rejected the demand.

Clashes erupted in Marawi, a city of 200,000 people, when security forces raided a house to arrest Isnilon Hapilon, a veteran Filipino militant regarded as ISIS' leader in the Philippines.

Authorities said they were taken by surprise when many gunmen emerged to protect Hapilon and then went on a rampage through Marawi.

Shortly after the violence erupted President Rodrigo Duterte imposed martial law across the southern region of Mindanao, home to 20 million people, to quell what he said was an ISIS bid to establish a base in the mainly Catholic Philippines.

Lieutenant-Colonel Jo-Ar Herrera, spokesman for the government forces fighting them in Marawi city, said Hapilon remained in the area.

"He's in charge of the (gunmen), he's commanding them," Herrera said.