Ex-ruling party still popular with rural voters, but junta aid winning some over

These days, the authorities seize calendars bearing his images. Under the close watch of the military government, the former ruling party plays down its links with him.

Partly hated, partly loved and widely caricatured, Thaksin still casts a long shadow over parts of the Thai countryside as the kingdom heads to its first election in eight years.

He has not set foot in the country since 2008, when he was convicted in absentia of conflict of interest. Yet behind closed doors, some rural folk in the north and north-east - Pheu Thai's strongholds - continue to keep their faith in him.

"When we have a festival or a house-warming party, whenever we meet, we discussed that we would love to see Thaksin running the country. With him (as a leader), farmers can recover," said 59-year-old rice farmer Chumpol Kae-apai from Chiang Mai.

Fellow rice farmer Kriangsak Chanachai, 63, from Roi Et province, said that Thaksin had promised during his term as prime minister to build canals to divert water to irrigate farmlands in his village, but the plan was stalled after he was ousted in 2006.

Standing on his parched paddy field the size of three football fields, he said: "If the project had been implemented, farmers would have been economically independent. We can use irrigation to grow off-season rice without waiting for the rain." 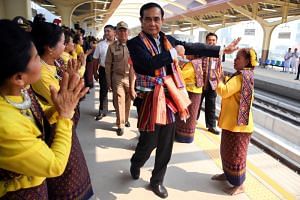 Mr Kriangsak remains hopeful that his "hero" will return to run Thailand, adding: "We will wait for his return, no matter how long it takes... He's still in our hearts."

Farmers say the billionaire tycoon ex-premier is down to earth, speaks the northern dialect and dresses simply. "A lot of villagers would meet him to shake his hands, and then boast about it when they get home," Mr Kriangsak recalled.

Thaksin's Thai Rak Thai (TRT) government wooed farmers with substantial subsidies through a "paddy pledging" scheme. Farmers could get a loan in exchange for crops during seasonal harvest gluts and repay it when the market rebounded - or even default on it.

TRT's successor, the Pheu Thai Party, which was headed by Thaksin's sister Yingluck, bought rice at even more inflated prices, leading to stockpiles and distorted global prices. The losses amounted to US$8 billion (S$10.8 billion).

She was impeached in 2015 for alleged negligence over the costly programme and now lives in self-exile.

But the nomination was swiftly vetoed by King Maha Vajiralongkorn, who denounced it as "extremely inappropriate".

On March 7, the Constitutional Court dissolved Thai Raksa Chart on the basis that it was "hostile to the democracy with a constitutional monarchy".

While many say they will continue to vote for Pheu Thai, some feel conflicted as the military government has also tried to help the region's poor. The junta has introduced free broadband Internet access to remote villages, as well as welfare cards for low-income earners. The cards, topped up with credit every month by the military government, can be used to buy groceries, bus and train travel.

Loans and subsidies were also given to farmers to help stabilise rice prices.

Farm hand Udom Hongpiphit, 58, whose wife has a welfare card, hopes that the next government will not abandon the scheme.

He still has not decided who he will vote for, saying: "I want to see the different parties' policies first."