KUALA LUMPUR • Malaysia's prime-minister-in-waiting Anwar Ibrahim told a British business daily that there are politicians in the country's ruling alliance who want to stop him from leading the country after Prime Minister Mahathir Mohamad.

Datuk Seri Anwar told Financial Times in an interview published on Wednesday that there are "pockets, people who for their own reasons would like to sabotage these arrangements", referring to a deal within the Pakatan Harapan (PH) alliance for him to take over from Tun Dr Mahathir after about two years.

"I can't deny, some people in the ruling coalition (have) a different agenda," he told FT.

His comments are seen as an acknowledgement of the tensions between him and Datuk Seri Azmin Ali, his deputy president in Parti Keadilan Rakyat (PKR).

Asked by Malaysian reporters yesterday to confirm what he had said, he at first denied saying so: "I never said that. No fake news will be entertained."

But he was later quoted by New Straits Times online as saying: "You cannot deny that there are some elements who might not agree. It's a democratic process. What is important is PH and I and Tun Mahathir have agreed."

Mr Anwar, who was Malaysia's deputy prime minister in 1998 before he was sacked by then Premier Mahathir, is now once again a rung below the country's top post. Mr Anwar's followers call him the "prime-minister-in-waiting". 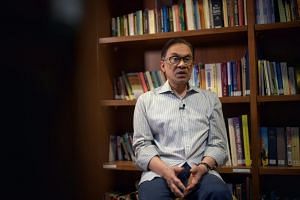 Prime minister post for Anwar under threat from within PKR, says veterans group

Anwar: Give Mahathir space to lead govt over agreed time

After being released from prison and pardoned by the Malaysian King following the May general election last year, Mr Anwar, 71, is now president of PKR, which has the biggest number of lawmakers in Parliament.

But there are tensions between his faction in PKR and those in the camp of PKR's No. 2, Mr Azmin, who want to prevent Mr Anwar from becoming Malaysia's eighth prime minister.

There is also suspicion among Mr Anwar's supporters that some leaders in the four-party PH alliance want Dr Mahathir, 93, to continue as prime minister until the next general election, due in 2023.

A pro-Anwar veterans group, Otai Reformasi, said there are individuals in PKR who want to prevent Mr Anwar from becoming PM.

"Otai Reformasi will oppose anyone who attempts to thwart Anwar from becoming prime minister as agreed to by the Pakatan Harapan presidential council," said the group's chairman, Selangor assemblyman Idris Ahmad.

Asked by reporters about the identity of the persons he was referring to, Mr Idris said the Facebook postings of these people clearly showed their intentions.

"We don't want doubts to be created and will go all out to defend the transition of power," he was quoted as saying yesterday by The Star online news.

Mr Anwar's supporters had insisted all along that PM Mahathir should step down after two years.

To ease tensions, Mr Anwar, in a Facebook post on Wednesday after an hour-long meeting with the Prime Minister in Putrajaya, said Dr Mahathir must be given the space to lead the country within the agreed timeframe.

A version of this article appeared in the print edition of The Straits Times on January 05, 2019, with the headline 'People out to block me from the PM job: Anwar'. Subscribe
Topics:
More
Whatsapp Linkedin FB Messenger Telegram Reddit WeChat Pinterest Print Purchase Article Copy permalink