GEORGE TOWN (THE STAR/ASIA NEWS NETWORK) - It comes as it always does - without fair warning.

On Saturday (Nov 4), the downpour started in the early afternoon, pounding the island until Sunday morning.

A brief respite from the torrent on Saturday night around 11pm convinced our extended family of 10 - comprising six adults aged between 24 and 63 and four children aged between three and six - to believe that the dreaded flood would not happen at all.

My siblings and I even thought it was safe enough to go out for a late-night food run for my three-year-old niece.

We quickly drove home and braced for the floods to hit, which seemed inevitable now.

Around midnight, while many families were asleep, the first of the floodwaters hit.

The Sungai Pinang river, which is just a stone's throw away from my village, swelled and spilled over its banks. 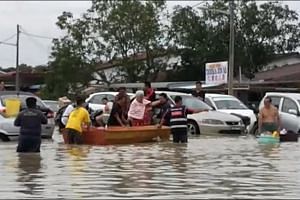 In the dead of the night, my family scrambled to salvage whatever we could and carry them up to the upper floor of our double-storey house.

Valuables, food and clothes - we carried as much as we could as the water level rose faster than we expected and inundated the floor of our house.

After several hours, we had to throw in the towel as there was nothing more we could do as the rain showed no signs of abating.

We went to sleep - or at least we tried to.

By 6am, the water in my neighbourhood of Kampung Rawa had reached waist level.

My mother woke me up - her face wearing a worried look - and told me to look outside my window.

The water in our house and was knee-deep.

The village mosque made an announcement that it was open for evacuees.

I messaged my editor at The Star's headquarters in Petaling Jaya to say that I might have to take leave, as I was stuck on the island.

By 7am, the water had risen further to chest level. 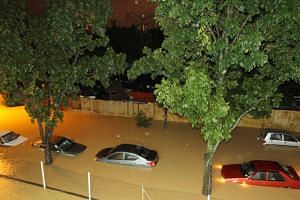 I watched as my father and brother waded through the water, checking on our family cars which were fortunately parked on higher ground.

Some of our neighbours' cars were submerged up to the roof, according to my father.

My father, who is a Penang native and still exhausted from the last flood, said this was the worst he had experienced in years.

My mother fretted over the the furniture in the family home that would have to be replaced, not to mention all the cleaning we would have to do later.

As of 9am, floods had subsided to waist-level and some of my more adventurous neighbours could be seen wading through the water to assess the situation.

My father, however, said this was no cause for celebration, and we should monitor the situation closely over the next few days in case the rain - and floods - return.

Casting a wary eye over the muddy water, he said there would be substantial losses caused by the flood this time, as he wondered when flood relief would arrive.