GEORGE TOWN (THE STAR/ASIA NEWS NETWORK) - Penang Chief Minister Lim Guan Eng has been condemned for delivering a political speech to an audience of children and dancing along to a parody of the popular children's ABC song that mocks the Goods and Services Tax (GST).

Mr Lim, who is also the opposition Democratic Action Party (DAP) secretary-general, was recorded on video calling for GST to be abolished before playing the tune and lyrics on a projector on Saturday (March 17) during a state endorsed event.

The video is a Facebook Live recording posted by Sungai Pinang assemblyman Lim Siew Khim during the launch of the People's Tuition Programme.

The song can be found in YouTube since April 2015.

Penang Gerakan chairman Teng Chang Yeow said it was inappropriate and irresponsible to bring politics into a children's programme.

"School children don't understand what is politics. They also have no idea what is GST.

"His action was not in line with his status as a state leader," he said. 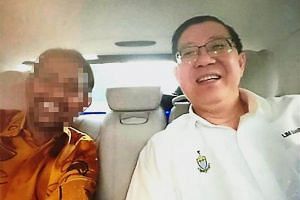 Meanwhile, a political party and two non-governmental organisations have lodged three police reports, urging the police to investigate the matter under the Child Act 2001.

"Lim criticised when Barisan Nasional's flags were distributed to school children in Kuala Lumpur in 2017, but he is doing the same thing now," he said.

"This is really unhealthy," said Sophian.