More questions have been raised about Malaysia's Forest City project for buyers from China, following Beijing's introduction of tighter rules to stem the flight of capital from the country.

The developer, Country Garden, had reportedly agreed to refund buyers from China caught out by the new capital controls, but a statement from the company late last night appeared to rule that out.

"In the event of home booking cancellation, we would also like to clarify that cancellation after a sales and purchase agreement has been signed is deemed as a breach of contract," Country Garden said in a press statement.

"The penalty clause, ranging between 10 per cent and 30 per cent, only kicks in when a buyer, who has decided to purchase certain promoted residential units, decides to default on the payment or cancels the sales and purchase agreement."

Earlier, the South China Morning Post had reported that Country Garden would work with buyers who have placed deposits on properties at the US$100 billion (S$140 billion) Iskandar Malaysia development but would now not be able to service payments because of tighter rules introduced by Beijing to stem the flight of capital. 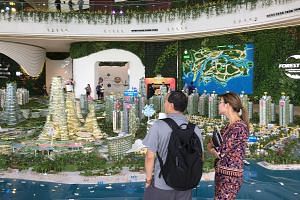 Such buyers "can cancel the transaction and there is no need to pay a forfeit fee", the South China Morning Post quoted Country Garden vice-president Zhu Jianmin as saying in a report yesterday.

It was a clear sign of the hit that developers banking mainly on Chinese buyers have taken, said analysts. Beijing has leaned on banks and card issuers to stop providing foreign exchange for people to buy property, securities and insurance products.

Mr Zhu emphasised that the project has always abided by rules and regulations of both Malaysia and China, and that only about 5 per cent of buyers were considering pulling out of their purchases.

Buyers contacted by The Straits Times yesterday said they have not been told of any change to Country Garden's refund policy, and that sales staff they had spoken to said there had been no change.

Some buyers, already in the process of seeking a refund, have accused Country Garden of dragging its feet or outright denying refunds.

"I called my sales officer on Tuesday and he could only say that my refund is still on hold," said Mr Zhang Guanguang, 27.

"It's been dragging on for more than a month, and all they can tell me is to wait."

Analysts said even if just a fraction of buyers are after a refund, it may result in a slowdown in the whole development, given fears of a housing oversupply in Iskandar.

The Forest City project is the biggest of 60 developments there, and comprises four man-made islands in the Strait of Johor facing Tuas in Singapore.