IPOH • Hundreds of passengers were stranded at the Sultan Azlan Shah Airport in Ipoh yesterday after three flights were delayed due to the haze.

Airport manager Mohd Ali Osman said the delay affected several flights, namely an AirAsia flight between Singapore, Ipoh and Johor Baru; a Malindo flight from Ipoh to Johor Baru and back to Ipoh; and a Scoot flight from Singapore to Ipoh and back to Singapore.

As at 3pm yesterday, a total of 549 passengers were still stranded at the airport.

Flight visibility was reduced to 2,500m as at 2pm, forcing the disruption in operations.

According to him, the first flight to be delayed was a 9.40am flight bound for Singapore.

Passenger M. Sundram, 52, said he was supposed to leave for Johor Baru on the 3.40pm Malindo flight.

"I didn't expect any delay as I thought the haze was not that bad in Perak. Anyway, it is all right... Better to be safe," he said.

Scoot Flight TR484 from Singapore to Ipoh was diverted to Kuala Lumpur yesterday, and landed there at 10.27am. The flight was originally scheduled to leave Singapore at 7.45am and arrive in Ipoh at 9am. As haze and poor visibility persisted in Ipoh, the flight could not proceed to Ipoh and passengers were provided with the option to either disembark in Kuala Lumpur or return to Singapore. 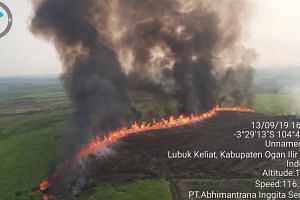 Meanwhile, the deteriorating air quality affected other states in Malaysia.

The Selangor state government has decided to conduct cloud-seeding operations in haze-affected areas where the Air Pollutant Index (API) reading exceeds the very unhealthy level of 200.

Mr Hee Loy Sian, chairman of the State Environment, Green Technology, Science, Technology and Innovation and Consumer Affairs Committee, said in a statement on Thursday that the measure was agreed at the Selangor Economic Action Council meeting.

"All schools, kindergartens and nurseries were ordered closed immediately when the API reading exceeded 200 after getting confirmation from the Selangor Department of Environment (DOE)," Mr Hee added.

Amid the worsening air quality, 29 schools in Selangor were closed yesterday. Public examinations, however, continued as scheduled.

Haze conditions worsened in the northern state of Penang yesterday, with the API reading at unhealthy levels in two areas on Penang Island at noon - Balik Pulau and Minden.

State Environment Committee chairman Phee Boon Poh said on Thursday that 100,000 face masks would be issued to students on Penang Island, adding that schools would remain open for now.