KUALA LUMPUR • The haze returned to parts of Malaysia yesterday, affecting the west coast states of Perlis, Kedah and Penang on the peninsula, and Sarawak in East Malaysia.

The risk of it reaching Singapore is currently low, as the winds are blowing the haze away from it, but "should the direction of the winds change and blow the haze towards Singapore, we may occasionally experience slightly hazy conditions", said a spokesman for the National Environment Agency.

Air quality was at unhealthy levels in Peninsular Malaysia, with the highest air pollutant index (API) reading recorded in Alor Setar, Kedah, at 157. Other badly affected areas were Sungei Petani in Kedah, Kangar in Perlis, and Seberang Jaya and Seberang Perai in Penang.

A reading of zero to 50 is considered good, 51 to 100 moderate and 101 to 200 unhealthy. Conditions in the capital Kuala Lumpur remained at moderate levels, with the API at between 65 and 67.

Meanwhile, the haze in Sarawak has been blamed on open burning in the state and the rising number of hot spots in neighbouring Kalimantan, Indonesia. State Natural Resources and Environment Board controller Peter Sawal said 121 hot spots were detected across the Sarawak border with Indonesia on Tuesday, more than double from the day before. Seven hot spots were also detected in Sarawak.

As at 2pm on Wednesday, nine areas in the state recorded moderate API readings, with Mukah recording the highest reading at 84. The other affected areas were Sibu, Bintulu, Samalaju, Kuching, Kapit, Samarahan, Sarikei and Sri Aman. Mr Sawal said the hazy conditions could last until the end of the month if there are no changes in the prevailing dry weather and wind direction. 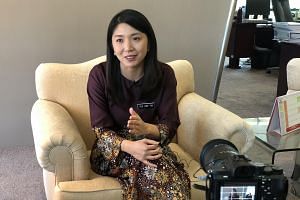 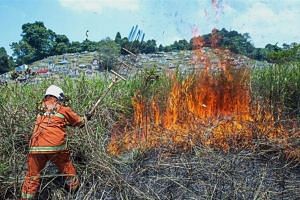 Hotspots and open burning bring back haze in Sarawak

Dry and warm conditions to ease in next 2 weeks

Malaysia's Minister of Energy, Technology, Science, Climate Change and Environment Yeo Bee Yin said she has asked the Department of Environment (DOE) to improve enforcement to put an end to open burning in the country.

"Only two or three weeks ago, I realised that the DOE doesn't even have cars to conduct enforcement," she said in an interview on Wednesday. "I am shifting resources from the ministry to DOE to perform their jobs," she added.

Ms Yeo said she has also asked for help from local councils and other agencies to investigate cases of open burning - traditionally used by farmers to clear land.

Asked if she would seek a meeting with the Indonesian authorities, Ms Yeo said: "I am trying to pay them a visit."

In a speech to Parliament, Indonesian President Joko Widodo noted that the total area of forest burnt has come down.

"The total area of forest and plantation that caught fire has significantly declined compared to the previous years. Such a firm stance would not yield maximum results without public participation.

"My gratitude and respect to the armed forces, police, local governments and residents that gave high dedication in preventing and fighting the threats of forest fire," he said.