More than 70 students in Johor's Pasir Gudang district were referred to hospital after suffering breathing difficulties and vomiting from suspected air pollution.

But officials yesterday appeared no closer to explaining the cause.

Housing and Local Government Minister Zuraida Kamaruddin had said at first that the air was polluted by fumes from incomplete cleaning up of the toxic waste dumped into Sungai Kim Kim in March, but later backtracked and said it was not related to the March incident.

As of 3pm yesterday, 75 students were referred to Hospital Sultan Ismail, with only four still warded.

At the Pasir Gudang Indoor Stadium, where most of the victims were given initial treatment, and in housing estates around it, parents of the affected students told The Straits Times they were very upset that this was happening again.

One of them was small-time trader Jamaluddin Abdul Malik, whose 13-year-old daughter was a victim of the latest incident. The teenager was also one of the victims of the Sungai Kim Kim pollution three months ago. "My daughter is very weak now and is currently in the hospital. Even if she is discharged, I am worried about letting her go back to school because we won't know if the pollution will happen again," he said. "We don't feel safe here. I feel that our air is not safe to breathe."

Some suspected that the toxic waste that was previously dumped in Sungai Kim Kim could be the culprit again. "Maybe they didn't clean the river thoroughly the last time," said teacher Siti Mariam Saim, whose her son, nine, was vomiting non-stop yesterday, while her daughter, six, had a headache. 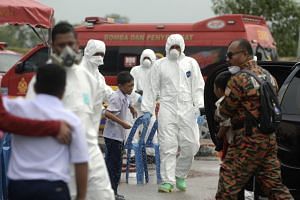 "The symptoms displayed were similar to the Sungai Kim Kim incident except this time it is less serious," she said, adding that the air had been smelling of "corroded iron" for the past three days, especially after it rained.

Concerned with what was happening, restaurant owner Rafea Abdullah stopped his daughter from going to school. He went to his daughter's school yesterday, located about 500m from Sungai Kim Kim, and which was one of the first schools closed during the crisis.

"I went up to the top floor of the building and immediately I felt nauseous, had a headache and difficulties breathing. I knew then something was wrong," he said. He added that he would be "very disappointed" if it turned out that the toxic waste from Sungai Kim Kim was again causing the problem.

In March, 111 schools in Pasir Gudang were shut for two weeks following chemical pollution of the river, which flows into the Strait of Johor just north of Pulau Ubin.

The disaster caused 5,848 people to seek medical treatment after inhaling toxic fumes from the river.

Yesterday, Datuk Zuraida said initial investigations found the cleaning contractor who was supposed to clear the Sungai Kim Kim waste did not do a thorough job, the Bernama news agency reported. "As the hazardous materials have been exposed to wind and rain, the uncontrolled airborne substances may have spread and affected the people once again," she said.

But in a later statement, she said that based from the latest information received, the hazardous materials in the river were already cleared and had been disposed of.

Health Minister Dzulkefly said the latest incident is not similar to the Sungai Kim Kim case.

"The victims of Sungai Kim Kim were warded in the intensive care unit but for this incident, the victims were just experiencing vomiting and shortness of breath," he said at a news conference at the Pasir Gudang stadium yesterday. "These (symptoms) will not stay in the body for too long, it will be excreted."

Still, despite residents' concerns, life went on yesterday. Businesses at the affected areas were operating as normal, and there was no panic in the air. There was a sense of inevitability that residents would have to put up with this.

"Of course I am afraid that this will affect my health, but what can I do? I need to earn a living," said a goreng pisang (banana fritters) trader who wanted to be known only as Kak Non. She said she did smell something funny in the air, but has not felt the need to seek treatment. "Life still has to go on."