KUALA LUMPUR (REUTERS) - Palm oil from an illegal plantation inside an Indonesian rainforest home to endangered orang utans has found its way into the supply chains of major consumer brands including Unilever and Nestle, according to a US-based environmental group.

The plantation is inside the protected Rawa Singkil Wildlife Reserve, in a high-priority conservation area and critical wildlife habitat, dubbed the "orang utan capital of the world".

Palm oil is the world's most widely used edible oil, found in everything from margarine to soap, but has faced scrutiny in recent years from green activists and consumers, who have blamed its production for forest loss, fires and worker exploitation.

"Effective immediately, the food companies and traders need to suspend sourcing from these mills that we have exposed," said RAN's forest policy director Gemma Tillack.

The investigation is the latest expose to put pressure on companies to prove pledges that they are not fuelling clearing of forest land for plantations and contributing to the impact shrinking forests are having on climate change.

Neither Musim Mas nor GAR confirmed which brands they sell palm oil to. GAR said the two mills named do not source palm oil from plantations in the Rawa Singkil Wildlife Reserve, although it said it could not yet fully trace the links between all the mills it uses and the plantations supplying them.

All the companies involved vowed to investigate, monitor or keep track of suppliers to ensure palm oil from protected forest areas does not feed into their supply chains. 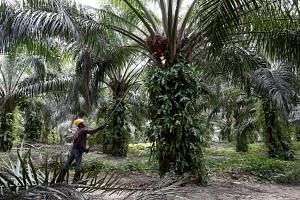 High-profile palm oil buyers like Nestle, PepsiCo and Unilever have committed to zero deforestation and to source only sustainable oil by 2020.

A spokesman for Nestle said GAR, a direct supplier to the Swiss food giant, had "conducted verification" with the mills named by RAN.

Hershey Co and Mars said they did not buy palm oil directly from GAR, but understood that the palm oil trading firm had reviewed the situation and found no evidence of wrongdoing.

Mondelez, the maker of Oreo cookies, said it had required all its palm oil suppliers to convert their entire supply chains to sustainable practices since 2014, and progress had been made.

"We, the industry, cannot win the fight against deforestation alone, and partnership with governments, suppliers and farmers is critical for success," added sustainability director Jonathan Horrell.

Consumer goods giant Unilever said it was aware of the RAN probe and was closely monitoring GAR's progress as it continued to map and trace suppliers close to Rawa Singkil.

Kellogg's and PepsiCo did not respond to requests for comment, while General Mills could not provide an immediate comment.

Ms Tillack said RAN began to map the Sumatran supply chain, including the mills and brokers who deliver palm fruit, a year ago.

Satellite images showed that an area within the 82,000ha Rawa Singkil Wildlife Reserve had been cleared in 2013 and illegally replanted with oil palm.

By tracking trucks and conducting interviews on the ground, RAN said it found that palm fruit grown on this land had been supplied to two nearby mills run by PT Global Sawit Semesta and PT Samudera Sawit Nabati.

The mills and owners could not be reached for comment.

"These mills are located on the doorstep of this reserve," Ms Tillack told the Thomson Reuters Foundation.

"It is very clear that they are at high risk of sourcing illegal palm oil."

Both mills are publicly listed as GAR suppliers, while one is linked to Musim Mas, RAN said.

Ms Tillack said GAR was made aware of the risks of using the two mills located so close to protected forests in 2017, and told RAN it would work with the mills on this by February.

GAR spokesman Anita Neville said the firm had engaged with its suppliers in Aceh and near the reserve since 2015 to help them "overcome the specific challenges" - and had made progress.

She said the company reserved the right to suspend suppliers who were not improving but that was not seen "to be the case in this instance".

GAR has a target of 85 per cent of the palm fruit in its supply chain being traced to the plantation it comes from by the end of this year, rising to 100 per cent by the end of next year, Ms Neville added.

A Musim Mas spokesman said there were nine mills in its supply chain that operate in the area surrounding the reserve.

About half the palm fruit the mills process can be traced to the plantation where it is grown, and like GAR, Musim Mas has a target of increasing that to 100 per cent by the end of 2020, she said.

As in previous cases, Musim Mas would "take immediate action once we know who the suppliers in question are", she said, adding that the company had conducted workshops with suppliers in the region to boost sustainability and traceability.

Mr Robert Nasi, director-general of the Indonesia-based Centre for International Forestry Research, said there had been "a slow but constant erosion" of the reserve's peat-swamp forest.

"Fears are that if this continues, the remaining orang utan population will become marooned on an isolated forest island in a sea of plantations," he added.